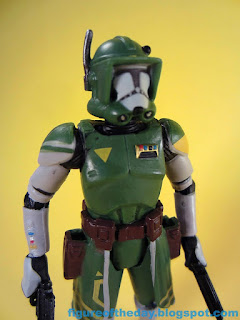 CLONE COMMANDER DOOM The One, The Only
The Black Series   Basic Figure
Item No.: Asst. A5077 No. A9360
Manufacturer: Hasbro
Number: #13
Includes: Helmet, staff, cape/harness, backpack
Action Feature: n/a
Retail: $12.99
Availability: May 2015
Appearances: The Clone Wars

Bio: Serving Jedi Masters Tiplee and Tiplar, this Clone Trooper Commander leads his unit in an attack against separatist forces in the Battle of Ringo Vinda.   (Taken from the first release's packaging.  The second release had no bio.) 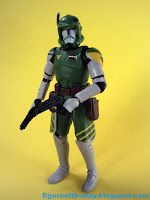 Commentary:  If Commander Thorn used the  Clone Commander Doom chest, I'd probably let a lot more slide.  Rank markings are actually sculpted on this Marvel homage, making it more than a tiny bit better than his companion.   Deco is all over the map, and the two I have each have unique problems.  One has big bold bright buttons on his forearm, but the also has some alignment problems with the grey stripes on his kama.  Maybe I can pop 'em apart and make a good one, but honestly neither one really hurts the figure.  What matters is you now have the Doctor Doom clone trooper you never knew you needed.

The build is similar to so many that have come before, with a few exceptions.  You do get bend-and-swivel wrists, but for some reason he only has a swivel waist.   The ankles are normal ball ankles, without the rocker motion.  Everything else is on par for a super-articulated clone figure, so it won't upset you if you're a reasonable person.  Due to the level of fancy on the paint job on the show, the figure can't match it.  Some of the grey markings on the chest are left off, as are some of the visually gorgeous wear and tear on the helmet.  Since most people won't compare the two, it won't be a problem - but it's another argument to just make a cheaper figure for six bucks and call it a day.  If my choices are a B/B- for $13 or a C/C+ for $6, just give me the $6 version. 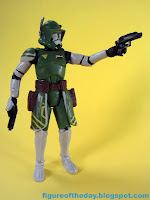 It stands, it sits, and it serves as a great little warning as to the future of the toy line.   Over the past few decades we've had a lot of downtime where Hasbro could play in any movie, book, game, or TV show to bring us new stuff.  Now there's new stuff every year - and synergy.  There are still going to be old and new characters, but Doom's squad?  No figures yet.  Tiplar and Tiplee?  No figures yet.  He's a cool commander, and a great in-joke.  But he could end up being a one-off, depending on how Hasbro pursues The Clone Wars in the coming years.  He feels like a relic from the end of the pre-Disney era, which he really is.   We don't yet know what the next year is going to look like, but we've seen some leaks and previews that show legibility of names aren't a priority.   It's possible finishing squads and bringing the obscure to life may once again be a thing of the past, thanks to the fact you can only make so many figures in a year and Hasbro's resources will be taken up by new movies from now until the child you conceive this weekend turns about 6 years old.

With grey and green limbs and a striking deco, this is a fun figure - but one that could have been improved immensely from more and better paint.  Should Kotobukiya or Gentle Giant make a collectible of him, I bet it'll be gorgeous.  Hasbro's figure is very good - again, the wrist buttons are perfectly done, and the rank badge was well-executed - but his role is to stand around and look cool.  He has no friends, no boss, no mission.  The lack of themed waves is something I'm really beginning to miss.

Collector's Notes: I got this online - you can probably score one for $13-$15.   Depending on where you bought him, him was sold in assortments or via solid-packed cases of 12.

This figure just doesn't get me excited to go find one. And sloppy paint jobs suck.