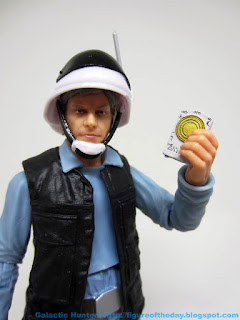 Bio: Drawn from many homeworlds and species, Rebel troopers were the Alliance's front-tier soldiers in the war against the Empire.  They defended the Alliance's leaders on countless worlds and during many operations, changing uniforms and tactics to meet each challenge.  (Taken from the figure's packaging.) 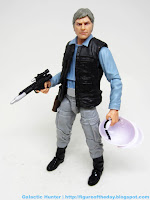 Commentary: We've seen this one for a while, so the release of the Rebel Trooper is one of those "it's about time" things.  We first saw it at Comic-Con a year ago, and Hasbro had a whole display of them at HasCon that made it look like they were ready to go - and then we waited.  The data disk is from Rogue One, but I think the human head might not be - I'm not sure.  The costume continuity was great, and if there were any changes I don't know what they are yet.  Vader had some differences, but his documentation was better.

I like this figure a lot.  The blaster tucks in the holster behind the vest, and he can hold the data disk. Getting the helmet on right is a little tricky, and a little uneven - I assume variant human heads might be in the works for no good reason.   The colors and detailing are consistent with the movies, and the hip joints are some of Hasbro's best.  He can kneel!   Hasbro cut this figure up nicely, with so much articulation to ensure he can assume a variety of combat-ready poses.  Hasbro clearly intends on you buying a lot of these, which you probably can't, because you know how "classic" characters get snapped up and tend to go away quickly.   I hope Hasbro does another run of these. 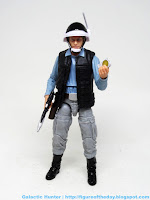 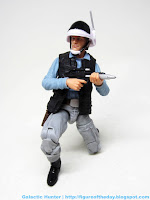 I love the glossy boots and the shiny helmet - the data card is an excellent bonus with printed circuit board bits and some nice gold markings.   Old guy fans want this - new fans might too.  It's one of the best figures in this line with a lot of flexibility and options to army-build down the road, plus an expertly cut vest hiding the one part of the figure I don't like.  That mid-torso joint is ugly and needs to go.