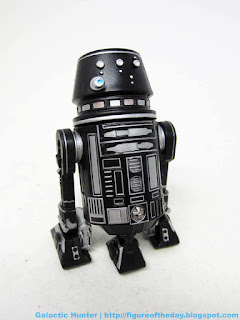 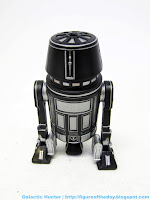 Commentary:  I put off opening these - and buying them - because the set is kind of dull.  Hasbro has made several black R5 droids, and so has Disney within their Droid Factory parts bins - R5-PHT has little new to offer, other than more silver paint and a restraining bolt.  It's otherwise similar - but not identical - to previous releases.

I'm not even going to dignify this with a longer review - it's the same robot with some more silver and a barely-changed dome sculpt.  Wookieepedia says it's an Imperial droid, and I don't remember seeing it in the film in a specific place - so sure, let's go with that.   The set for $30 is reasonable, but if you've also got droid Stockholm Syndrome and have been buying Disney's hassle-of-a-figure-line for the last five years, here, you can buy pretty much the same robot again.   I appreciate there are numerous additional silver details and I would be completely full of crap if I told you I actually wanted this figure.  The others were neat, but this is something that will sit on a shelf until I die or violently exit the hobby in frustration or disgust some day.   But then what would I do with my otherwise wasted life?

Collector's Notes: I got mine from eBay. Because I'm not driving eight hours and paying for parking to buy robot repaints.

Hi, it's a Holoprojector on it's dome, not a restraining bolt and it can be see verrrry briefly in the gate room on Corellia