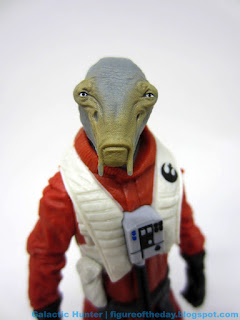 Bio: C'ai Threnalli[2] was an Abednedo male who flew in the Resistance Starfighter Corps of the Resistance's military during their conflict with the First Order.  This packaging has no bio.) 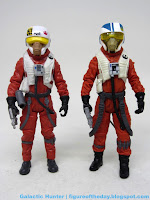 Commentary:  This is a figure I wasn't sure if people would want - at work, we picked it up after Hasbro dropped it from the US mainline.  C'ai Threnalli looked like a slightly better Ello Asty at first glance - this time with a removable helmet and no holster.  The figure had a bit more to offer than sounds and new joints, and has proven to be pretty popular.  (I've seen the sales figures.  This should be the first one to sell out.)

The arms seem to be derived from the same digital sculpt as Asty, as do parts of the torso - the vest matches the wrinkles on the older figure in spots quite closely.   It's a safe bet Disney and Lucasfilm are giving Hasbro some digital assets while not being afraid to tweak existing models.   Threnalli has articulated wrists and boots either as a forward-thinking way to fit in future vehicles, or as a cost-cutting measure to avoid having to paint those pieces by molding them in color. I assume the latter.  It's a nice feature though - I'll take articulation any way I can get it!  The helmet is rubbery and is a perfect fit on his head, which is sculpted surprisingly well with a lot of detail. 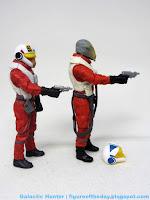 It looks better than a lot of the other The Last Jedi figures, which kind of is unfortunate as it had more limited availability.  It's similar, but different, and certainly good enough to warrant your attention with extra flight straps and definitely new legs.  C'ai, along with Maz Kanata, a Flametrooper, and Emperor Palpatine were all bumped from the main line but all found homes somewhere.  (The single Palpatine was sold overseas, and in 3-packs at Target.)  I think they're all decent for different reasons.   If you're a pilot fan, get one.

Collector's Notes: I got mine from Entertainment Earth.   This figure was originally slated to be a part of the first Force Link line for The Last Jedi but when the final wave got axed, this item was dumped in the USA.  It is a de facto USA Entertainment Earth exclusive.