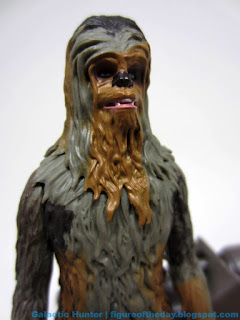 Bio: Chewbacca, known affectionately to his friends as Chewie, was a Wookiee warrior, smuggler, and resistance fighter who fought in the Clone Wars, the Galactic Civil War, and the conflict between the First Order and the Resistance. He hailed from the planet Kashyyyk and became a Wookiee military leader.  (Taken from Wookieepedia.   Packaging has no bio.) 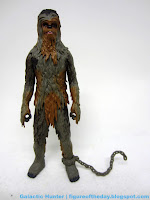 Commentary:  While not as scary as "The Beast," Chewbacca (Mimban) manages to mash up a few looks in a single figure.  The 5-jointed release is soaked with mud, making him a lot less fluffy than other versions.  Weirdly, this gives Chewie a look that's a lot closer to the original 1978 Kenner figure.  He's really skinny and for the very first time, comes with no bandolier and no indentation for when you remove the ammo belts.   A muddy body is painted over with Chewie's fur colors.

The skinnier take on the Wookiee is a welcome change, and while he has no accessories to speak of there's a nifty mud-covered shackle on his leg that matches Han's.   It's an incredibly rubbery figure, with flexible arms and a head that can turn a bit or pop off pretty easily.  The body has a hairy "vest," with fur hanging down like a loincloth restricting a bit of movement.  Since the figure isn't seen sitting in a vehicle, and Hasbro has not been super supportive of vehicles, I don't see this as a tremendous problem. 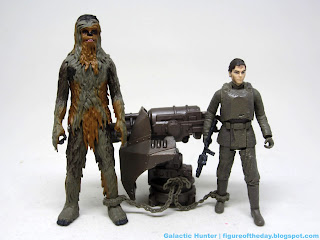 He stands nicely and the arms swing well, giving us another new take on Chewbacca.  Given he looks pretty similar in most of his incarnations, I'm kind of jazzed to see something that's more than "new forehead hair" or "snow on feet."   The soaking, muddy figure is a heck of a nice change and a welcome addition to my toy box.   Or it would be, if the dang thing weren't overflowing.