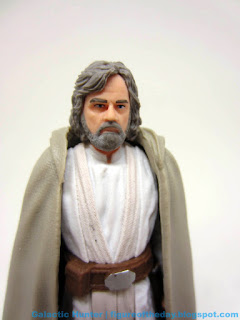 Bio: Luke Skywalker was a Force-sensitive human male Jedi Master who was instrumental in defeating the Galactic Empire and the Sith during the Galactic Civil War.   (Stolen from Wookieepedia.  Packaging has no bio.) 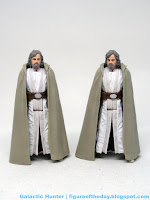 Commentary:  Guess who's just different enough to make you mad?  This Luke Skywalker (Jedi Master) figure seems to be selling briskly in some markets, but it's a vast irritant to me personally.   The figure is a redo on Luke Skywalker [FOTD #2,403] which wasn't too hard to find, but with a new sound chip.  I would have preferred no changes - but that's not up to me.  Hasbro brought back a popular figure, changing it slightly so completists may feel obliged to buy it - but really, just because a lot of fans want to get a figure of Luke as they may remember him now that he's gone.

If you read the earlier review, it's the same figure - even the copyright markings are the same.   The green Force Link 2.0 icon is the only genuine change here.  The 5 joints are the same, the awesome textures remain, the articulation is still decent, and it's still our childhood hero before his last stand.  If you have one of the other versions of this figure - and if you're a completist, you may have several - you can enjoy this one's unique Force Link sounds without ever having to open the packaging.  I like it, but if you have another version of this figure you really, truly, do not nee this one as well. 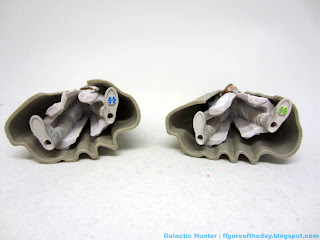 I should emphasize that this is not a bad action figure - it's just more of something you may already have bought in the last 10 months, and that's always a disappointment when something new would be more exciting.

Force Link 2.0 Notes: "I will bring an end to the Jedi order."  "What do you know about the Force?"  "Reach out with your feelings."  "Stay back!"  And wooshing sounds.