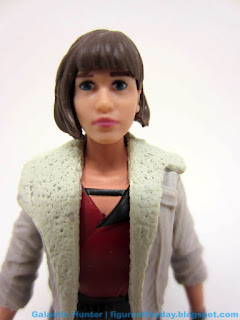 Bio: Qi'ra was a human female from the planet Corellia who lived during the reign of the Galactic Empire. She grew up on the streets along with Han Solo before becoming part of an opulent life working for the Crimson Dawn gang.   (Stolen from Wookieepedia.  Packaging has no bio.) 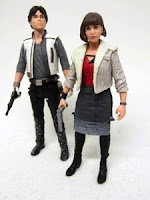 Commentary:  The character of Qi'ra seems like something a long time in the making. Variations on the name have been floated for several of the Disney-era films (Kira, for example, was a working name for Rey) plus she seems like she might be up for being something more.   We didn't get a lot of motivations from her other than "stay alive" and "Han's a charmer," so if she shows up again in the future the Corellian gangster has the potential to be very interesting. She also had some awesome outfits, many of which would make great action figures some day. I hope.  If only people went to see this movie.

The figure itself is solid - 7 points of articulation with minimal restrictions is tough to pull off when you have a jacket and a legit skirt.  We often kid about the waistcoats and such being skirts, but she has an actual skirt - and a pretty nice jacket.  The costume is colorful and Earthy, looking vaguely like something out of the 1980s mall culture mashed up with The Fifth Element.  The furry trim and shirt look great, and the skirt is over some tight pants with nifty boots.  The wrists turn at the forearm, plus the hands hold the blaster with no real problem.   The skirt is soft enough so she can swing her legs forward to sit in Han's (stolen) speeder, too.  I really love how the hair turned out, and the slightly exaggerated eyes look fantastic.

It's a good figure.  It just works.  I wish they picked a costume that wasn't from the brief prologue, but that's life.  I'd love to see Hasbro give us the jacket with Lando's cape like she wore on Kessel.     Hasbro did a good job on this figure, and I really hope we see more.  I hope she crosses our paths again at the movies, but until then go ahead and get yourself this figure.  But don't do it for the voice chip.