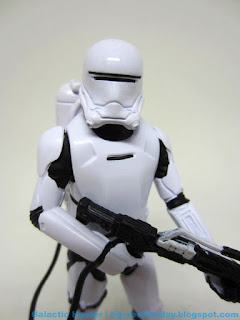 Bio: Specialized Stormtroopers of the First Order, Flametroopers carry incendiary weapons that can transform any battlefield into an infernal blaze.  (Stolen from the 2015 figure packaging.  This packaging has no bio.) 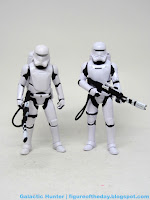 Commentary:  Generally speaking I'm pretty fond of trooper figures, especially when new poses come in.  The surprising thing about the Flame Trooper is that he is a big improvement over The Force Awakens Flametrooper [FOTD #2,200].  Both have the same number of joints and appear to be cut from the same cloth, but the 2018 version has some improvements.  (Also I worked to bring these out to Entertainment Earth, so consider this your bias warning.)

First up, the white is glossier and seems almost painted all over - it's s harp.  The whites are brighter and shinier, with a few extra paint applications.  A line in the chest is painted, and the backpack has some red dots that weren't painted before.     The index fingers are white now rather than black, which is more consistent with the prop replicas and merchandise appearances.  A few panel lines and dots were left undecorated, but someone with a fine enough paintbrush or toothpick could probably touch it up pretty nicely.   Hasbro basically fixed a number of details from the 2015 release. 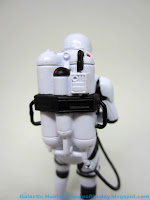 Despite only having 5 joints, they did improve the pose.  The arms are now both posed to hold the blaster with both hands, truer to the movie.  While not super-articulated, it's a heck of a nice improvement and arguably a better way to build an army.  You could probably get a few of each flavor and makes a nice display - the colors may not be a perfect match, though.   Given its status, I'd say it's worth getting.  But of course I'd tell you that.  If a better super-articulated one ever makes the rounds you'll likely want that, but with few unsightly joints and a decent flame-sweeping pose you still may wish to get one or two of this model.

Force Link Notes: "What are my orders?"  "Sir! Resistance fighters!"  "Call in the airstrike!"  And some flaming death noises - these are likely not from the movie.

Collector's Notes: I got mine from Entertainment Earth.   This figure was originally slated to be a part of the first Force Link line for The Last Jedi but when the final wave got axed, this item was dumped in the USA.  It is a de facto USA Entertainment Earth exclusive.