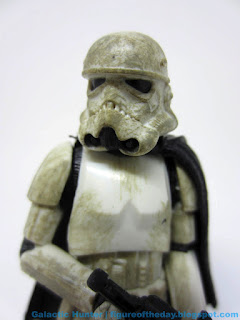 Bio: The Mimban Stormtrooper was a variant of the Galactic Empire's standard stormtrooper. Some were part of the 224th Imperial Armored Division on Mimban, a mining planet located in the Expansion Region. Mimban Stormtroopers were armed with E-11 blaster rifles and they wore capes.  (Stolen from Wookieepedia.  Packaging has no bio.) 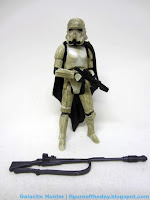 Commentary:  I was thrilled at the idea of a Mimban Stormtrooper because I read Splinter of the Mind's Eye and who doesn't want Mimban-based toys?   The black-suited Luke and Leia from that book have been requested by fans since the 1990s, and Hasbro never got to them.  A pity.   It's kind of a surprise that it would be Han Solo to take us there during a brutal, pointless, and muddy battle.  There were multiple kinds of troopers and cannon fodder there, including this new Stormtrooper variant.   It's an all-new figure sculpt, but it's also very similar to the original model with a revised helmet, a cape, and either mud or camo. I have no idea what it is.

I've heard people say "less is more," but this 7-jointed figure lacks enough paint apps where I would say less is less - the LEGO figure looks a smidgen better.  The wrists are jointed and it has the typical shoulder, hip, and neck joints.  The hands are capable of gripping his blasters, but it's a loose grip.   The cape is plastic, and hangs well.  The paint on the body is perfectly nice with a helmet that disappoints a bit.  It's not bad... just disappointing. 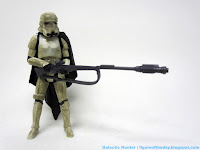 The sculpt is good - the helmet's forehead has an extra layer of armor that looks almost like a visor on the forehead. The parts are all where they should be, although many aren't painted. There's a black mark on the ear that's blank. The mouth is unpainted.  The "vents" are unpainted. The swoosh under the eyes? Also unpainted.  Everything is sculpted, so it probably suffered a budget cut or two.  A black line on the visor is also blank.  The figure is otherwise good - this sort of lack of detail is rather disappointing, particularly given every Stormtrooper since 1995 has tended to deliver on these painted areas.  It's a bizarre step back on an otherwise particularly enticing action figure.

Because it's a new trooper from an old planet, I'd recommend getting it - but better versions are coming.  Hasbro tried some good ideas here, but finding the right center of gravity is difficult.  The paint job could be better.   Still - it's different.  For that reason I'd say buy one, but maybe hold off on troop building until something better comes along.  I know the side-story movies haven't proven as popular financially, but boy howdy I hope Hasbro mines them for more toys.

Force Link 2.0 Notes: "Trooper standing guard."  "Enemy re-enforcements incoming."  "Look alive."  "We're taking heavy fire here."  "There they are. Blast them!"  "Ahhhh!"  And blaster sounds.  This does not seem to be taken from a movie voice.