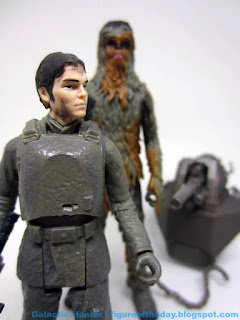 Bio: Han Solo, formerly known only as Han until being given the surname Solo by chief recruitment officer Drawd Munbrin, was a human male smuggler who became a leader in the Alliance to Restore the Republic and an instrumental figure in the defeat of the Galactic Empire during the Galactic Civil War. (Taken from Wookieepedia.   Packaging has no bio.) 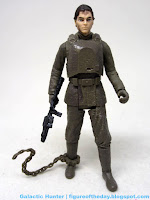 Commentary:  I like this Han Solo (Mimban) figure.   When I first saw it, I didn't think much of it - a mud-splattered figure with a costume I think I'd rather like was irritating, but Hasbro actually leveraged the strengths of the medium to make a pretty good figure.   Han has 7 points of articulation thanks to his wrists, and looks vaguely like Alden Ehrenreich.

Han sits and stands quite nicely, with joints that swing largely unobstructed like most of the figures that come out of Hasbro's Vietnamese factories.   But you're used to that - the 2-packs are largely pretty great.   What makes this figure interesting is the color and texture.  From the neck on down, Han is molded in a single color with tons of muddy texture and a tiny, almost invisible splash of lighter color paint, and it's great.  Molding a figure in color generally gives it a glossy texture if you do it right, and Hasbro did.  The lumpy splatter of the mud changes the figure's look significantly, with muddy metal and cloth bits looking like they just pulled him out of some puddle.  The head is a little wet, with slicked-back hair and dirt on his face.  The face could look more like the actor, but that's what we're getting now.

His leg chain is articulated and can be removed - I haven't removed it because it looks like it might be hard to fit back together again.   It's still nifty, and I'd say it's worth the asking price if you see it. 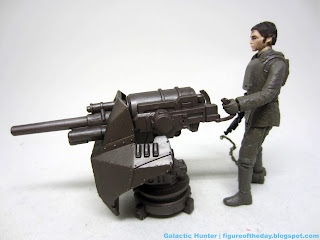 It comes with a 3-piece cannon accessory that doesn't hold together so well.  The front shield will not stay in place, and while I will rarely advocate gluing something in place, I'll make an exception here.  When you see this on clearance, get a second one and glue it.  It's nothing special - a couple of hand grips, a rotating base.   The hand grips come warped.  It's OK.   I like the set overall, especially given how Han Solo is a fascinating example of how to do new textures and colors while cheating the cost goblin.   I don't assume we'll see a "clean" version soon, so go ahead and score this one.