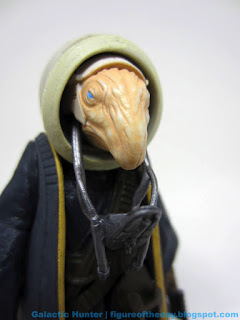 Bio: Moloch was a male Grindalid who lived in the galaxy during the reign of the Galactic Empire as member of the White Worms gang. He was one of few members of the gang willing to leave the sewers, but when out of the sewers he had to wear white armor.   (Stolen from Wookieepedia.  Packaging has no bio.) 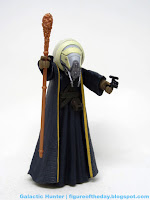 Commentary:  While everybody broke street date on wave 2 from Solo, I hadn't seen Moloch in the wild - I got mine from work.   It's kind of fascinating to see Solo figures not only sell, but seemingly sell well.  Someone's buying Chewbacca, Qi'ra, and now Moloch too - and it makes sense.  These characters look even more like a step removed from "real Star Wars" than the sequels, feeling like they might be at home in something like Droids or some other cartoon.  I mean that as high praise - this feels like real, OG expansion Star Wars material - as does the movie, plus or minus a cameo.   Rogue One and Solo are basically Star Wars films for older fans, and if Hasbro leaned in to that in the toys more I think there would be a lot of very happy collectors gobbling them up. 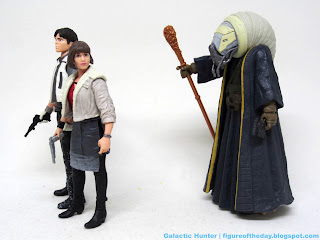 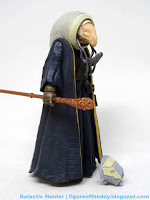 Moloch is from the movie's opening, a short film of sorts giving us Han's reason for being in a couple of minutes.  He worked for a gang, which had a worm lady leader and a bunch of Grindalid enforcers who didn't do well with sunlight - so we have this armored, robed creature with a staff so he doesn't combust in the atmosphere.   The mask does pop off to reveal his head, which itself looks like something from either Return of the Jedi's concept phase or Melas from the Special Edition.  He's wrinkly with a curved face and pale eyes - he looks like a creature of the night.  His hands are basically mittens with an index finger, articulated at the forearm for maximal accessory grippage.   He has no problem holding the staff or gun, and the gun fits in the holster. 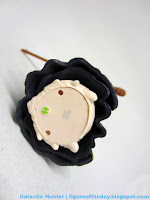 He's the same species as Lady Proxima, and you'll note this is a "chess piece" figure - Hasbro made it without leg articulation since it has wormy bits under those robes.  It's really cool and something quite different than we normally get.  I just assumed it was going to be like Bib Fortuna or Mas Amedda with his nicely-sculpted robes and staff, but the superstructure was given some thought.  You see organic bits.   The multiple layers of robe and removable mask are a nice touch too, making this one of few figures in the Solo line that feel like they're more than worth the price of admission.  I would not bet on seeing another 3 3/4-inch Moloch - but a 6-inch one would be very nice - so get this one.  He's also the only new character in the Wave 2 basic figures.

Force Link 2.0 Notes: Various beeps, alarms, and alien sounds.  It works, I like it.

This was the only figure in the line that I felt a need to pay retail for. He wwill be right at home hanging out in Mos Eisley with Sarko Plank and Unkar's thugs.

You nailed it about the untapped potential for figures from RO and Solo, so many cool characters!