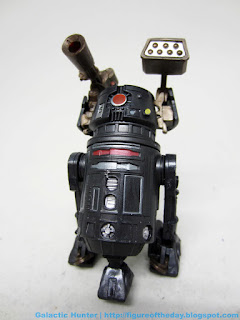 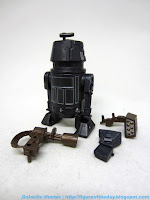 Bio: In a mission gone wrong, Doctor Aphra finds herself at the hands of the formidable Sith Lord, Darth Vader.  A rare survivor of such meetings, Aphra is recruited by Vader for her skills in reprogramming droids and her apparent lack of remorse for breaking the law to get what she wants.   After a brief checkered partnership with Darth Vader, Doctor Aphra escapes from the control of her dark supervisor and his clandestine agenda.  Free of her obligations to Vader, Aphra ventures out with her assassin droids, 0-0-0 (Triple Zero) and BT-1 (Beetee), and Wookiee bounty hunter Black Krrsantan in search of new opportunities, leal and otherwise.   Though unafraid of using whatever means necessary to get what she wants, Doctor Aphra is careful to avoid additional entanglements with Darth Vader, understanding all too well the vast reaches of his unflinching power..  (Taken from the figure's packaging.) 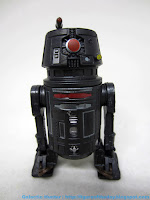 Commentary: Even though "everything is canon," licensed fiction is still licensed fiction - contradictions will happen, events will be ignored.  But what we can't ignore is how awesome the figure for BT-1 turned out.   The idea in the comics was to bring Vader a sidekick with sidekicks of her own - darker versions of R2-D2 and C-3PO - and they succeeded.  Fans like "dark whatever" a lot, so this was really just low-hanging fruit at which we have seen numerous attempts over the years.  Finally!  An evil black astromech!  The killer robot takes advantage of the recently retooled build-a-droid body (seen last as R2-D2 [FOTD #2,430], but with a new head. 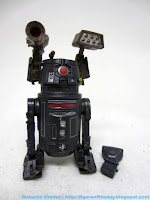 If you've got any of Hasbro's various "Droid Factory" bodies, you know what to expect as far as the body goes.  The ankles are articulated, the central leg is removable, and so is the dome.  The very dark grey - almost black - is similar to several existing robots, as is the orangey copper eye, the opper panel, and the silver other bits and pieces.   The fact that we got a new dome is in and of itself interesting enough to make it worthwhile, but Hasbro kept going and really outdid themselves.   You see, the guns are removable - and there are panels on the sides so you can cover them up, giving you back a closed-in dome with pop-out weapons.  Pretend ones, but still, the idea that they decided to give you some optional parts is a heck of an improvement over nothing. 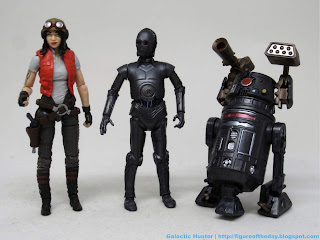 As of today this figure is only available as a convention exclusive - but various leaks and winks from Hasbro in San Diego make it seem like they would be likely to consider this figure's release again, somewhere, in different packaging.  I'd say it's exciting, mostly because we rarely get new droids with new parts.   Hasbro could've given us a new dome with no removable pieces and we'd have been pretty happy - this is above and beyond that.   I'm happy.  Go get one.