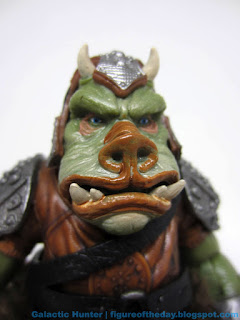 Bio: Burly, pig-like brutes who favored axes and other primitive weapons, Gamorreans were often used as muscle by Hutts and other underworld kingpins. Jabba the Hutt employed a gang of intimidating Gamorreans to guard his palace on Tatooine.  (Taken from the figure's packaging.) 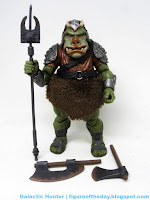 Commentary: Star Wars has boundless potential in its margins.  The 6-inch line has largely done a good job with the major players, but rarely does Hasbro scratch the B- and C-listers of older movies that make collecting fun.   They should do more, because figures often end up like this gem. A Gamorrean Guard is a fantastic big and beefy brute, appearing in an oversized box with lots of deco and bonus accessories.  It's great - for $30 you get your money's worth.  The super-articulated figure has an exceptional range of motion with three nicely-decorated weapons.  In other words, you might want to buy more than one. 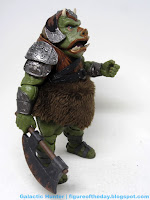 27 point sof articulation build him out, allowing him to menace Jedi or debtors or just about anybody.  One axe matches the 1983 Kenner figure, another matches the 1997 figure.  Both have rusty, bloody blades and wooden handles to give them a great sense of realism.  A third pole weapon looks spectacular, but lacks the extra color of the axes.  It's still pretty awesome.  The figure has armored shoulder pauldrons which are fused to the body, plus extra armor bits molded directly to the green ham flesh.  The sculpting is top-notch, but the deco is even better with painted finger and toenails, a pink snout, and glossy lips. 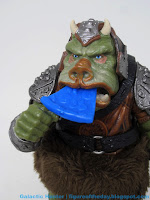 The figure has nicely engineered arms that allow for tons of great poses, possibly giving the figure more of a range of movement than the guys in the rubber suits had.  The elbow cuts are deep so he can hold a weapon over his shoulder, or even double-grip the pole arm.  The rocker ankles are wonderful to have, and it's really something to see the range of movement given to a figure that has, historically, been chunky and difficult to pose in other forms.   I love the soft, fluffy briefs and the belt is no slouch.  The spiky armor bits are lovely, and the textures all over the figure are the kind of thing I can scarcely have imagined five or ten years ago.  There's a grid pattern on the silver part of the hat that knocked my socks off.  The face is perfect.  The bandolier looks like an old worn belt   I don't doubt a figure sold at a higher price could be even better, but this is stunning and would probably compare favorably to any other competitor made in this medium. 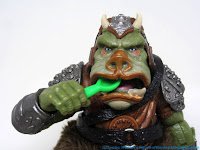 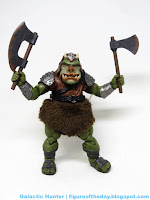 I'm glad to have gotten this figure and I hope to get one or two more to go with my Jabba.  I'd love to see more of the goons from Jabba's palace over time, but given the high price and slow rate of release I assume it might be another few years before we get a Bib Fortuna, a Klaatu, a Nikto, or some of the weirder creatures.   If this figure is any indication, Wooof is going to be off the hook - but until then, go ahead and get this preposterously good Gamorrean Guard, what with his opening maw and ability to carry toy food amusingly.   If you have other small toy things to have him hold and put in his mouth, you're in for a treat.  Get this figure, even if you're not a Star Wars completist.