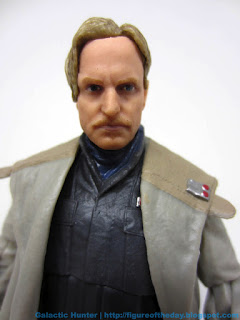 Bio: Beckett is a survivor, always quietly working out angles to come out ahead.  He's assembled a team of specialized scoundrels to carry out risky but profitable heists.  (Taken from the figure's packaging.) 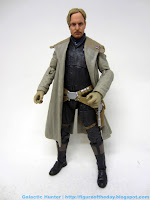 Commentary: If you told me that I would some day be getting mega-poseable figures with photo-realistic likenesses for $20 and it might start to feel ho-hum, I'd say you were crazy.  With Tobias Beckett, we get Woody Boyd as an old man with a pretty good - if slightly waxy - likeness and a ton of articulation.   27 points of articulation, working holsters, and twin painted pistols make this a decent figure - but the sculpted snaps and buttons really make it look great.  He stands, he poses, and he has great cut joints in the elbows allowing for a greater range of motion than all but the very best double-jointed elbows.

Deco is good - the costume is amazing with a jacket, suit, rank pins, boots, straps, ammo, and so much going on that it's pretty amazing we're still getting it for about $20.  The face is good, but needs work.  While we get eerily realistic glossy eyes, the mouth is a little dirty and the facial hair doesn't feel quite right. 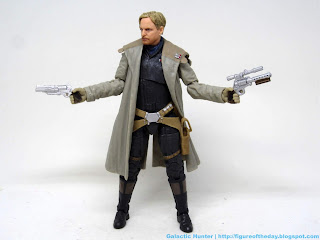 The problem with collector lines, and Star Wars in particular, is that enthusiasm from fans usually comes from two places - awesome new bad guys, and nostalgia.   The new humans (for good or for ill) are rarely causes to celebrate, even if they're good.  Unless you get in too close, this is one of the better Hasbro heads, with a good costume, great trigger fingers, superb texture, and wonderful articulation.  And yet, it's just another figure.  Without the hazy mists of time, these figures can't become icons.   Tobias Beckett is fine, but it's not his or Hasbro's fault that this is the fourth movie in as many years and fans can barely catch up.   This is a fine product - and if you like the character, you should get the figure. Otherwise, well,  you know the drill.  Hasbro makes good figures in The Black Series, consistent and sturdy.   Nice job to team Hasbro, although my old fartness would have loved an action feature, or something unexpected -  you know, something antithetical to the product.  It's perfect for what it aspires to be, though.