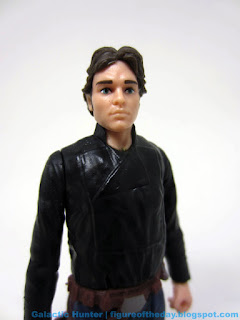 Bio: Recreate the adventures of a galaxy far, far away like never before with Force Link 2.0, featuring Bluetooth technology that allows for interactive social play within the world of Star Wars!  (Stolen from the web marketing copy.) 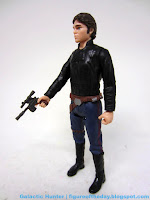 Commentary:  I liked the movie, but this particular Han Solo isn't particularly exciting.   In a way, it's kind of an ideal vehicle pack-in - decent, but not exciting.  Different, but not essential.  If it just got left in the pilot's seat, that's fine.   His digital sculpt is derived from the same source as the pack-in Force Link 2.0 Han Solo, and you'll notice similar if not identical legs as well as a torso with the same folds in the shirt.   That figure has a jacket and slightly better posture.  This one has a black shirt that you see in the movie briefly.   It fits in the vehicle, it stands and sits. It looks like Han Solo, but not Alden Ehrenreich.  I assume this is by design - the head reminds me of a pastiche of facial features of Kenner's old figures, and I have little doubt this was a result of the character's casting raising eyebrows during the reshoots.  If it looks like "Han," at least if it got recast, you could still sell the figure.  (This is why we might not see a Dryden Vos for a while.) 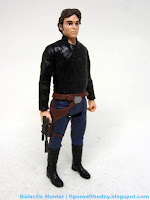 As a collector, I find the figure interesting.  Hasbro gave it a Kenner-ish pose with bonus articulated wrists, so it looks good standing on a shelf and has a good center of gravity.   It's a bland outfit, and the paint isn't as good as the other Han figures - the belt is missing a couple of painted rivets.

The one thing this figure has over his other counterparts is a painted brown grip on the blaster.   It's a little anemic, lacking in physical presence and in accessories.  Similarly, the Millennium Falcon itself is light on gizmos and things like seating for figures.   It has an impressive array of blast-off panels, lights, and sounds with a ship that's so tiny that no figure can stand up inside the body.  Or sit.   It won't make you want to give away any of your previous Falcon toys, and I can say without hyperbole that while it may have the best electronics and motion-sensor elements, it is the worst vehicle for figure compatibility.   If you're a completist you probably will buy it for Han, but if you can wait for a sale you might want to do that.  It may well be the best version of this phase of the ship we ever get.