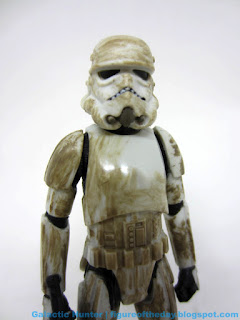 Bio: Han is cagey about where he scored this overpowered M-68 landspeeder, saying little beyond that its previous owner no longer had need of it.  The M-68 is a design from the ancient core world of Corellia, now a principal starship production facility for the Galactic Empire.  (Taken from the figure's packaging.) 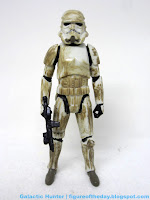 Commentary:  I like this Stormtrooper (Mimban), but I wish it had some more paint and could be bought by the dozen.   Unlike the single-carded counterpart, this one has no cape and comes with the 5 traditional joints - the neck on mine only swivels, rather than having a full range of motion.  It has a wonderful swamp wash over it, but numerous helmet details are left off.  The single-carded figure had less going on than this one, which adds mouth vents and a little more variety on the chin area.  The "ears," the jaw vents, and the entire back of the helmet remain undecorated - but as a driver figure, this sort of thing isn't exactly a huge problem.

The figure look just fine and is a bit hard to get at press time.   He stands, he sits, and he can pilot the ship with no problems whatsoever - I would have loved a weapon storage compartment, but there's no problem with the trooper holding the blaster while seated.   The sculpted details are nothing particularly new here - it does appear to be a mostly new sculpt, but it's a Stormtrooper and seems to share some similarities in design with the Rogue One figures.

The included vehicle is an interesting one.  I find big, armored craft with wide-open driver's seats kind of stupid, mostly because any idiot can get knocked out or ripped out by a large, stronger person.   If you can get past the fact that you've got an open bunker on legs, it's pretty awesome.  The AT-DT has a rocket launcher, plus a button on the head that causes it to explode.  It's a real toy!  The cannon flies off and the seat blows out, ejecting the driver.  I really like this.  I also like that the legs are jointed in two places so you can balance and display this vehicle, and the ball-jointed ankles ensure you can do some neat dioramas with it.   The toy is cast in a brown-tinged grey, painted with splotches of mud as well as some dark grey and off-white on the feet.  Why, I don't know, it's a mud planet not from that one party scene in Logan's Run.   It's a fine vehicle, and I hope to see Hasbro continue to crank out more new toy vehicles with this level of sophistication.  I got it assembled in about 4 minutes.  Snapping the legs in took some force. 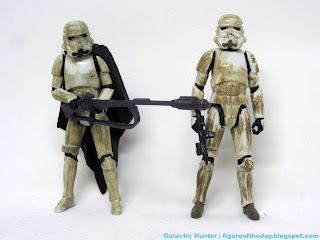 You might not be thrilled to pay $30 for this, but if you figure the driver at $8 and the rest at $22 it's pretty decent.   I like the quality and I like the design, mostly, if you can forgive the design flaw of a tank with a driver exposed to the enemy.  At least it looks Star Wars-y and as good if not better than my mini-rigs.

It was basically designed as a German 88 Flak gun from WW2 attached to the legs of an AT-ST. The 'head' is very nearly an un-altered German 88. Those flak guns had open canopies like this. In fact, you very lucky if you even got one with the shield protector on it.