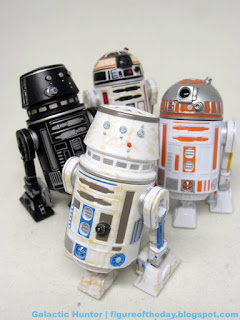 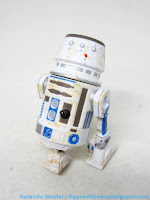 Commentary:  I saw the movies in theaters twice and do not recall seeing R5-232.  For reasons such as this, it's sort of brilliant and kind of horrible.   My love of droids is well-known, with the Ironic Punishment Division of Lucasfilm seemingly intent on giving me many droids to chase at levels of inconvenience hitherto unknown to man.   They range from being entirely new droids to figures with slightly different colors, with a few barely changed.  This one has had some changes.

Parts of this customizable droid are largely recycled from previous toys, all of which are adapted from a toy from 2009.  The head has a hole, the legs are retooled to lack wires, but the body is particularly interesting in that it added a restraining bolt to it.  The paint seems pretty close to the movie reference photo on the package, which as of now is the only known reference from the movie.   I have zero idea where this droid appears in the movie - and I bought it, because I'm dumb.  Now you're dumb too.  This is the mummy's curse. 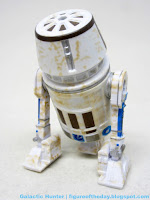 I love the fact that there's an R5-D4 redeco with puke green and some light rust on the exterior, plus a weird red light under his eyes and a restraining bolt on it.   While so many of the droids are existing molds with new colors on it, two of the four robots in this set gave them a little more personality.   That red eye and bolt are more interesting than a simple palette swap, although I would love to see more details in the initial design like a mismatched panel or an odd leg that may have stood out in the movie so that I could have noticed it during my theatrical viewings.

The metallic blue and matte mushy, old pea green go nicely together and give the figure a sort of a weird, retro, lived-in quality.    This little fellow has some personality to it, but what wouldn't I have given for a reason to tell you to buy one beyond it being interesting scenery.   Disney has given us at least 2 holiday droids every year, at least 4 boxed set droids since 2015, and dozens of parts to customize dozens more robots.   If Hasbro or Disney never gave us another new droid, I'd have enough to keep me satisfied for life - especially since I doubt new playsets that would welcome them home are unlikely to exist.   I dig it because it's a fun robot from the early days of the Empire, but you have no reason to buy this unless you're a collector.

Is this a Disney park exclusive?