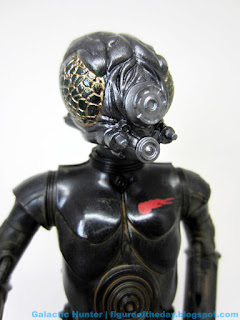 Bio: A rusty droid with insectile features, 4-LOM was originally a protocol droid, but logic glitches allowed him to escape his programming and become a bounty hunter. That proved a perfect occupation for the cold, calculating mechanical bounty hunter.  (Taken from the figure's packaging.) 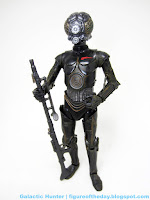 Commentary: Historically 4-LOM is an afterthought - but for Hasbro's 6-inch line, the droid bounty hunter is the fourth in the squad of six!  That ain't bad.  (Also the first three are getting reissues.)   This droid has been in short supply since its debut, in part because it was only in one wave and in part because it seems there's a lack of Original Trilogy stuff in general - so people buy it.  It includes a familiar blaster rifle, and the legs incorporate C-3PO bits, but the deco and new elements are great.

The biggest improvement is in the arms, with elbow joints allowing for the pylon to move and not freeze the elbows in place.  The hands can hold up the rifle, and the shoulders can rotate and swing in and out.  The wrists bend and swivel, with a newly sculpted chest and head to boot.   The head is cast in clear green so you might see trances of green light come from the big eyes, and the chest is the chest.  It has the red swipe, and a hint of the rusty paint we've seen on some of the figures from over the years.   It's a little light on rust, though.  It's also excellent.  The figure can't exactly sit, but that hasn't been a priority for this line - especially not in droids, even when you have some like C-3PO that can indeed have a reason to sit in certain vehicles.

Also notable is the smell - this smells a lot like the vintage Kenner Darth Vader I had as a kid. The plastic smell is very distinctive, maybe you'll get flashbacks too.  I like this figure, but it could have used a tiny bit more paint. Other than that, it's great - and greatly improved from C-3PO.  Get yours now, obviously.