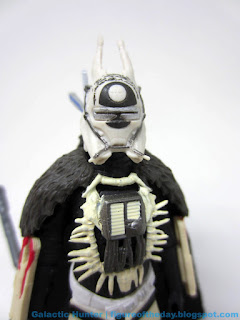 Bio:  The Cloud-Rider gang led by Enfys Nest terrorizes the skies atop their mean-looking swoop bikes. Little more than engines with seats, swoops are hard to control but capable of incredible speed.

Commentary:  Zorro meets a mishmash of retro design sci-fi fun and the possible founder of the Rebellion with Enfys Nest, whose identity was kept a mystery so the figure has no removable helmet - which I can appreciate, because the trailers made me think it might be Qi'ra under the mask.  (It wasn't.)   A super-articulated version of the figure can be had on vintage-style packaging, but this one comes with her bike - and it's not a bad bike. 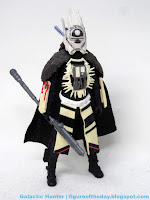 Ms. Nest has 7 joints - the typical 5 plus a couple of swivels for forearms to better let her ride the bike.  It works well - I like the detail and deco here.  There are tons of bony bits around the chest control panel buttons, complete with fascinating textiles hanging off the legs and big hair plus hairy elements around the shoulders.  There's a cloth cape and a cool helmet that is a great mix of futuristic with a primitive culture flair.   As character designs go, this is a really cool costume and she stands fairly well.  As a bonus, her weapon can be mounted on her bike - I love it when Hasbro includes this kind of detail. 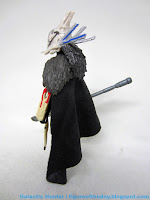 I would get this figure just for the bike, if you want one - it looks cool!  It doesn't do much.   You'll probably want the Vintage one for more articulation, but the cost of that one and this one aren't all that far apart - so keep an eye open and grab what you like and see.   I don't know which one is best yet, nor do I expect an unmasked version in the near term at this size.  (It wouldn't stun me to see her unmasked as a 6-inch figure in the next couple of years.)

Packaging Notes: This is a comical waste of space - but not as goofy as the Wampa.  The bike has no stand and comes fully assembled, packed at an angle taking up the entire diagonal measure of the box.  It's big, with a lot of air in it.  It's more sensible than some though.