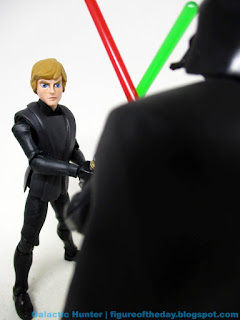 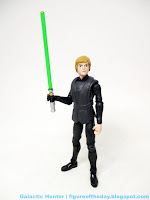 Commentary: This Luke Skywalker from Galaxy of Adventures ain't bad.  Granted, he doesn't fight a Gorax like in the Forces of Destiny shorts but they can't all be perfect - this figure is a nifty twofer, which means it hits some marks and misses some others.  The base figure is the Death Star II outfit - complete with glove, but with a rubbery vest over it like you saw in Jabba's Palace.  In short, that effectively makes this an update of the 1983 Jedi Knight Luke Skywalker figure - it's close, but maybe not perfect, to what you see on the screen.

As with the other figures, Luke has an exceptional range of movement hampered only slightly by his vest.  The rubbery garment has cuts in it so the leg movement is good, but there's no waist movement as it covers the whole thing.  Luke can be posed kicking, slashing, The Force-ing, or generally standing around waiting for someone to push him into a giant hole with teeth.  You get swivel wrists, rocker ankles, and roughly 80% of the quality of The Black Series at 50% of the price.  If you just want a good Luke figure, this is it - he can stand, sit, slash, duel, and look pretty good while doing it.  The face could look a little more Lukey, but it's still good enough. 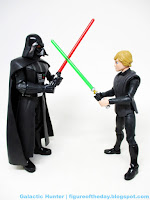 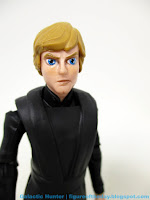 I don't love the slash attack - both arms can click up or down, but the spring-loaded action doesn't really give me a satisfying sense of sword fighting.   One arm might have been good, or some sort of spring-loaded waist - but both arms seem to have difficulty moving a decent distance at the same time.

If you want a Luke figure to futz with on your desk, buy this one.  It's easy to pose, cheap, plentifulish, and cheap enough that it's not exactly going to break the bank.  I love how the hair is a separately molded piece of plastic with a fantastic painted face on it, and it feels like a pretty durable toy.  We won't know for sure how durable until we see how intact they are a few years from now at garage sales and thrift stores, but for now it's sturdy and holds together well.