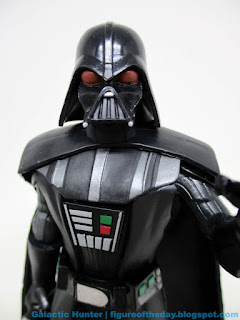 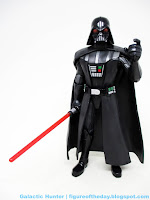 Commentary: Given there was a 5-jointed 3 3/4-inch action figure and a 5-inch super-articulated Darth Vader for $9.99 this year... something seems wrong.  This larger-than-usual Sith lord doesn't seem to necessarily be fro a specific film.  The asymmetrical helmet says it's not the prequels.  The red lenses would make me assume it's from the original film - but the gloves and robes match the sequels a bit more closely.  Since key art from Lucasfilm recently shows Darth Vader with elements from multiple suits mashed together, I think the answer is "Lucasfilm Licensing does not care, so why should we?"  Because that's what we do, dagnabbit.

The lightsaber is thicker than usual, with a big handle.  It feels more substantial than the larger 6-inch action figure lightsabers but it has a non-removable blade.  It's good - Hasbro did well here.  Vader's cape is non-removable, but it's flexible enough that it doesn't get in the way of action posing the figure.  Hasbro did a good job engineering this one. 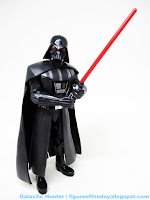 The sculpt is interesting, but messy.  The chest has gone from a rectangle to a trapezoid, and the buttons are warped to match.  This is kind of interesting, btu it's also kind of annoying.  The helmet is also exaggerated a bit, with other elements like the boots, gloves, and belt buckle being enlarged too.  The texture of the black body suit is still there, and there are wrinkles all over to make it look a little more alive.  They did a nice job making a very stylized figure that's in no way authentic.  There are some similarities to the Galaxy of Adventures cartoon design, but that version is beefy like nobody's business and the helmet looks a bit different.  I would argue the figure is the better of the two designs.

Thanks to the big boots, wide-ranging hip joints, and rocker ankles, you'll have no problems getting cool poses out of this one.  I would give this as gifts to fair-weather fans that just want a toy Darth Vader for their desks.  The vinyl cape hangs better than the cloth one, and he seems to be a bit more balanced than the 6-inch The Black Series action figure line.  The spring-loaded waist gives a decent and unobtrusive slashing action, but the codpiece is wide enough to prevent the figure from seating, even though the capes are cut in a way that doesn't hinder movement.  As such, Hasbro will have to make a new one if we ever see a TIE fighter in this scale.

As its own animal, I'd strongly recommend this figure.  It's sturdy, $10, and more or less all the Darth Vader you need as a fan.  Collectors are already covered - but I would like to see Hasbro apply this articulation (and frankly, price point) to 6-inch or 3 3/4-inch figures to see if we can get something even better.  By trying something new, Hasbro escaped the bounds of comparisons to previous toys too much - this is its own thing. It's a new collection.  Your kids will probably like it, until they realize all the weird characters are in another scale.

Email ThisBlogThis!Share to TwitterShare to FacebookShare to Pinterest
Labels: Darth Vader, Empire, Galaxy of Adventures 5-Inch, Return of the Jedi, Sith Lords, The Empire Strikes Back, The Rise of Skywalker Line Look