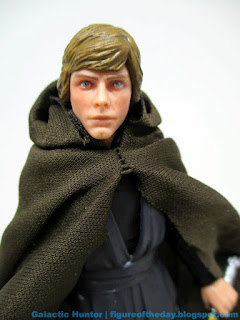 Bio:  Luke Skywalker was a Tatooine farmboy who rose from humble beginnings to become one of the greatest Jedi the galaxy has ever known.  (Taken from the figure's packaging.) 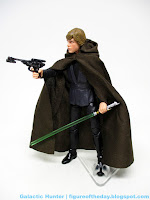 Commentary:  It was unclear where this figure would end up thanks to traditionally iffy communication surrounding launches, but I found Luke Skywalker (Jedi Knight) by the pile - along with Spirit Yoda - about a month ago.  I like it! I first heard it was expected to be at Disney Stores, which I perused on business trips and came up empty.  I will say this is a pretty neat figure and I'm glad it's a decent upgrade of what was seemingly a future-proofed 2014 figure.

The decent-for-2014 head was replaced by a comparatively stunning, gorgeous, almost perfect upgrade.  The new hair and printed-on portrait give this figure a lot of life, even if the cheeks are a little rosy compared to the anemic and pale original.  He shares a lot of parts with his ancestor but replaces the belt with a new vest and ditches the gloved right hand for a new fleshy one.  Considering Hasbro usually just colors the gloved hands in flesh when it came to 3 3/4-inch figures, this is a welcome attention to detail.  I also appreciate the boots aren't overly dusted, and Hasbro trusts we can add dirt as needed. 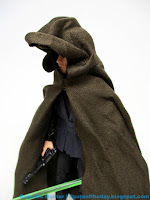 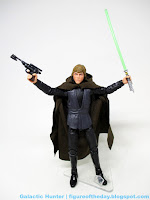 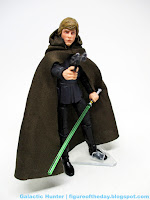 Unfortunately, the figure also keeps the wonky 2014 elbows that couldn't even bend to a full right angle.  I have no problems posing Luke in his "Is he really going to shoot Jabba the Hutt?" pose, but he's not exactly perfect.  But then again, that's what these 6-inch figures are - display pieces.  He'll do his job well.  Hasbro did a great job upgrading a 2014 figure to look gorgeous, but it retains the 2014 functionality.  At least you get a fully-painted lightsaber hilt and a nice blaster.  Now let's talk about getting some aliens to stand around so Luke has someone to fight.