Star Wars Figure of the Day: Day 2,650: Knight of Ren (The Vintage Collection) 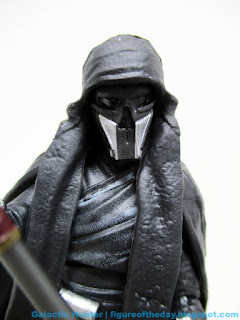 Bio: The Knights of Ren were a mysterious order of elite warriors that followed the dark side of the Force in an age when the Sith were extinct and the Jedi Order was all but destroyed.  (Stolen from Wookieepedia. Packaging has no bio.) 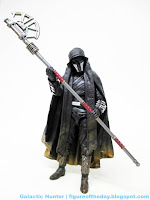 Commentary: In The Force Awakens in 2015, we got to see a few people that are now known to us - still nameless - as a Knight of Ren.  Who is Ren? Why are they knights?  Are these muddy goth kids with sharp toys?   I'm writing this before The Rise of Skywalker hits theaters, so I don't know why or if this robed, spiked, and dirty warrior is important.  We saw him in a Force flashback in 2015, so the hope is that he'll do something cool in the new movie.  I wouldn't bank on it - I'll know (and you'll know) when this review goes live. 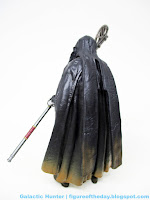 The figure is good, and is Star Warsy enough that I'd say you should get it for that reason.  the two-piece axe pops together or apart nicely, and can be held just like you see in the very boring cardback photo.  The helmet has long straps of material over the top, which makes the figure look like a rather silly variation on Darth Revan.  On top of this, there's a cape - and all of these hide a lot of the joints.  Knight of Ren (the first) has loads of articulation like bend-and-swivel wrists but standard ankle joints.  The thigh cuts remain, as do the fancy hip joints allowing lateral movement.  Knight of Ren's costume is admittedly mostly bland.  Were it not for the graves and vambraces that seemed meant to evoke the Shredder, the figure is basically just some dude in black pajamas with gloves and boots.   There's also a belt buckle that probably has no real significance, but looks like it could be used to power a breathing device or to store cashews.  We just don't know and maybe never will.

I think this is a cool figure and probably exists as a canny attempt to give collectors more Sith-like baddies.   Funko is delivering more Knights of Ren than Hasbro so far - but hopefully Hasbro will continue the collection, and who knows - maybe Disney will give us a show about the Knights of Ren some day. (I would probably watch it.)  Right now we're being given these figures with minimal background, allowing us to fill in the blanks - effectively making them like Boba Fett in the 1970s and 1980s.  Maybe there's more to them - and maybe there never will be.  Either way, the design and mystery will probably be served to separate us from our money for years to come, with this release as a decent enough place to start the process.

Email ThisBlogThis!Share to TwitterShare to FacebookShare to Pinterest
Labels: Knights of Ren, The First Order, The Rise of Skywalker, TVC