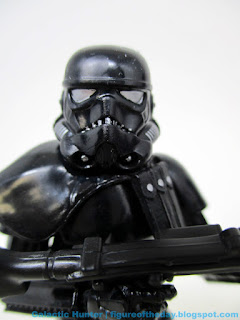 Bio: Shadow troopers were elite and highly trained stormtroopers that served the Galactic Empire during the Galactic Civil War against the Rebel Alliance. They wore distinguishing black suits of experimental armor coupled with portable cloaking devices, rendering them almost completely invisible and highly suited for stealth missions.  (Stolen from Wookieepedia. Packaging has no bio.) 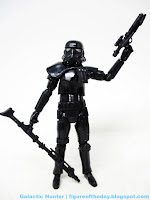 Commentary: For you old people, you'll recognize the Shadow Trooper as a Blackhole Stormtrooper - a silver-lensed black-armored trooper from Russ Manning's old comic strips.  I am a cranky fan, and this scratches my Old Guy Fan itches like nobody's business.  Hasbro had done a few black Stormtroopers before, but they were close-but-not-perfect when it came to replicating the unique shiny black armor with silver eyes look.   I guess these appeared in games - which is why we get it with the pauldron and the extra-ornate blaster pistol - but this is unmistakably that Russ Manning art as a figure.  If you're an old Expanded Universe fan, you already know you want and indeed need this.

If you got the Rogue One Imperial Stormtrooper [FOTD #2,598] a few months ago, the core body is exactly the same.  You get the same amazing articulation, and the same construction, and many similar paint applications - just with more gear.  If you want a black pauldron, and a rifle, you get them here.  It's gorgeous, and something I've wanted them to do (correctly) for years.  The black Crimson Empire trooper figures didn't have the silver lenses, and neither did the Russ Manning-specific comic pack Blackhole Stormtrooper [FOTD #1,491] from 2011.  It took decades, but Hasbro nailed it this time.  Next time, I hope they can do it in red. 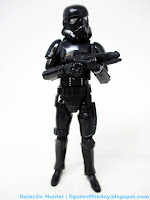 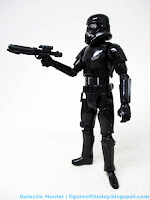 When you get one, take note - the black plastic absorbs a lot of visible flaws.  On my sample there were some strange molding defects, including dimples in the thighs and a strange mark on the back of the leg. There was no way I could have seen this before opening the package.  Also one of the knees on mine is stuck, and hopefully I can do something with boiling water to fix that - even if I can't, I'm pretty darned happy this figure exists in this deco.  Nice job pleasing the olds and the new fans, Hasbro/Disney/Lucas.