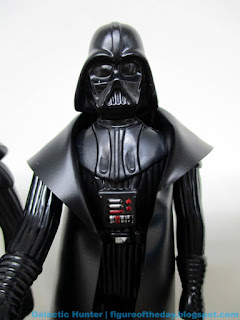 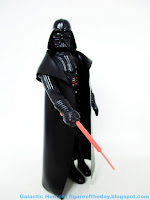 Commentary: And - for now - this is the end of The Retro Collection.  The classic Darth Vader brings back one of the more popular figures in the 1980s, warts and all, with some upgrades and some things that seem a little worse.  It's different.

My original Vader's lightsaber is a little pinker or oranger - the 2019 remake is a deeper red.  The cape from 2019 seems about the same thickness but with a slightly finer texture, and I would probably having a hard time telling one from another by feel and weight were it not on a marked "new" or "old" figure.  It's close.

What's particularly interesting is that Hasbro changed the figure itself a bit.  The original 1978 Darth Vader had red and white buttons and markings on the chest.  The 2019 version replaces white with silver - it's also much glossier, which is a visual improvement. Some of the sculpting seems a bit more wobbly, the ribbing on the arms is wavy in spots that were straight on previous releases.  With the changes to the lightsaber color and chest paint, this figure becomes what I want out of a reissue - something different.  I could (and indeed have!) bought these figures for years, especially back when they were cheap.   The reissue of a figure is ultimately a copy, a forgery, a pretender to toy history - so why not make it more interesting or better?   The silver chest markings look great, and it's different enough where I as an old person appreciate the change.  I don't necessarily need more of the same, so doing something new is fun and welcome.  Hasbro also tinted the cardback photo's lightsaber to a more accurate red (rather than pink) color. 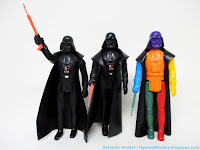 I think if Hasbro takes more cue from this figure - better photographs, better colors, better color plastic - further reissues could be really exciting.   I don't need reissues of figures Kenner sold in the millions, but if you can do something interesting like correct Han Solo's carbonite block color or maybe even Hammerhead's jerkin?  I would be interested in that.  If they can keep the ribbing on the suit right, that would be fantastic, but what Hasbro ultimately delivered was good enough.

..and yes I've been nagging Hasbro for more of these guys.