Star Wars Figure of the Day: Day 2,637: The Mandalorian (The Black Series 6-Inch) 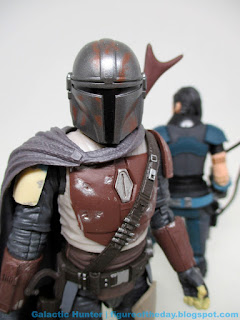 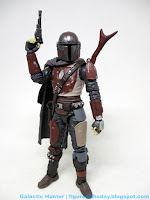 Commentary: Premiering tonight (and as I write this, I haven't seen it yet) The Mandalorian is the first streaming-only Star Wars series.  With The Clone Wars and Rebels (and maybe the last 4 episodes of season 1 of Resistance) the serialized format seems to work well for the saga.  After all, afternoon serials were a big part of the inspiration.  From the look of things The Mandalorian TV show spared no expense to lean on all the fan nostalgia buttons while casting incredible fan-favorites alongside mega-talents to direct and create the show.  It's a supergroup of a project, spoiling us with riches.  What could possibly go wrong?

"Make another Boba Fett" seems to be a recurring theme inside Lucasfilm, with "Babe Fett" (Aurra Sing's hand-written notes), Jango Fett, and so on.  Each time we got just a little too much backstory, which tends to miss the point of what made the debut of Boba resonate for so long. For years, his origins were conflicting, contradictory, or subject to the whims of the times. Parts were true - were they all true?  We didn't know, until 2002 at which point we got the raw dump of everything.   As of now, The Mandalorian is this character's name and for all we know, we'll never find out more.   Maybe he'll just be a cool guy in the center of tons of adventures.  Or maybe we'll find out his entire story and negate a desire for a second season.  At least the figure is good. 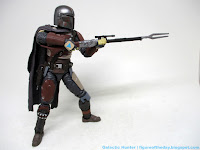 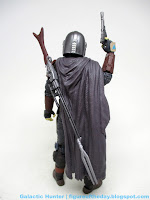 The figure's armor says a lot - I haven't seen a full teardown of it, but there are some familiar landmarks. The helmet and chest plate look like classic Boba Fett-inspired gear.  The right shoulder armor looks like a Shoretrooper.  The figure certainly seems like it has gone through a lot, thanks to damage and bullet holes and other evidence of wear and tear.  The blaster looks nifty, fitting in the hand or the holster.  A rifle also looks awesome, containing elements from the Holiday Special prod weapon.  The rifle plugs in to a hole in the figure's back, which itself goes through another hole in the figure's bandolier.  Everything fits together nicely once you get it aligned, with the cape hanging a bit off to the side.  The only thing missing is some sort of backpack - everything else seems descended from Boba Fett's basic look and feel. 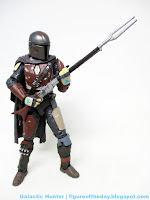 One thing you'll love is that the figure has those new shoulder joints that go forward and backward as well as the standard movements.  One thing you'll hate is the rifle's painted peg starts to scrape when stored in the back.  If you open it and want to keep it mint, don't use the storage on the back.

You don't need to tell me that you want this figure, or that you want to see the streaming show.  This is pure fan fulfillment, giving people a heaping helping of the kind of stuff they want - so the expertly decorated and textured figure is something that you know you want already.  (Or don't.)  Even if the show is terrible, this is a wonderful figure with bend-and-swivel wrists and rocker ankles.  If you can find him, go ahead and get The Mandalorian - you won't be sorry.