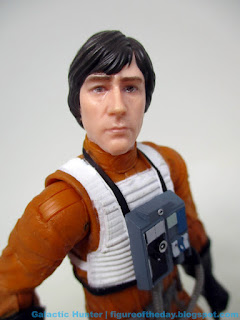 Bio: A talented young rebel pilot from Corellia, Wedge Antilles survived the attack on the first Death Star to become a respected veteran of Rogue Squadron.   (Taken from the figure's packaging.) 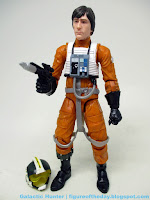 Commentary: Can you believe Hasbro gave us Wedge Antilles before a second Cantina alien? I'm stunned.   The figure is a reasonably clever rehash of Luke Skywalker [FOTD #2,553] that mostly works.  Denis Lawson is actually an inch shorter than Mark Hamill, so the body reuse makes a lot of sense.  For my sake I would have loved to have seen a new jumpsuit, but I suppose a photo-realistic Wedge is better on an old body than Biggs on a short body.  What I'm saying is that this is good enough and I assume may have been made as a hint as to the next movie's casting.

If you bought Luke, you know what to expect.  The body is pretty much the same, which means some of the switches on the chest box don't quite match the color reference of the movies.  (Or at least, they don't match the photos I'm looking at from Return of the Jedi.)  Also odd, we never saw Denis Lawson with his helmet off in the original Star Wars, so here he has his ears covered by his hair.  In Return of the Jedi, he has two haircuts - you can see his ears in the briefing.  During the Endor party, his ears are slightly more covered but not completely covered.  Does that mean Disney/Hasbro/Lucasfilm had reference of Mr. Lawson that we've never seen?  Possibly!  All I can say is that this isn't authentic to any reference materials I have at my disposal - but since the helmet covered his hair in that first movie, I don't know that it's necessarily incorrect. 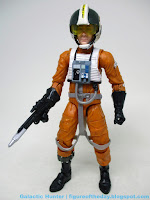 The helmet looks great and fits nicely, and the pistol is a tight fit in his hand.  Correct me if I'm wrong, but I'm also fairly confident we've never seen Wedge with a blaster - but this blaster is consistent with most of his previous 3 3/4-inch releases.

When it comes to classic characters, Hasbro has had a good eye for keeping the 6-inch line's authenticity.  I am hesitant to say this is a perfect figure - I'm amazed we got it, but since it's just a new head they could just as easily have made it as an exclusive for a retailer.  The worst I can say about it is that it's good enough - the new parts are excellent, and the execution is nothing short of perfectly fine.  I would have loved to see what a new body would look like, but given the size requirements there's no reason for Hasbro to invest tens (or hundreds) of thousands of dollars on completely new figure molds.   Get it and push your nostalgia buttons, while also considering that this could well be a hint as to a The Rise of Skywalker cameo as has been hinted/rumored/confirmed depending on who you ask.

Also, since they used the Luke mold, Wedge has a hook for a lightsaber he doesn't have. Amusing.