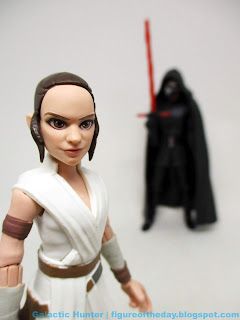 Bio: Rey, a Force-sensitive human female, was a scavenger who lived on the forlorn frontier world of Jakku during the New Republic Era. Toughened by the harsh environment of her homeworld, Rey lived in solitude until events drew her into the galaxy-wide conflict between the First Order and the Resistance. (Stolen from Wookieepedia. Packaging has no bio.) 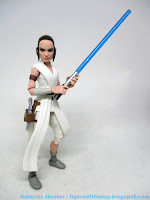 Commentary: You don't need a new scale, but these Galaxy of Adventures 5-inch action figures are pretty great.  $10 gets you a figure like Rey, which feels like a real toy.  She has 23 points of articulation, which is kind of painful when you compare her range of movement to a 3 3/4-inch figure which costs $13 or more.  And those don't necessarily have rocker ankles, either.   The more stylized figure doesn't have the level of detail as the "realistic" collector-targeted figures, but as far as how it plays?  It's just as good if not better than the other sizes.  The "Rey" likeness is there, but there's not a lot of Daisy Ridley in this otherwise spectacular toy figure. 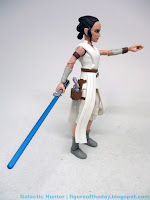 The figure has a lot of the same movement that you see on a typical super-articulated figure - if you've got a 2003 Clone Wars Super-articulated Clone Trooper, Rey is pretty close.  There are some changes and improvements, plus the waist joint is now a spring-loaded attack mechanism.  The hands have no problems holding the oversized weapons, and the blaster tucks perfectly in the holster.  Her head is huge, and has two neck joints for optimal movement.   The ball-jointed hips have a marvelous range of movement, but what really stuns me on this series are the rocker ankles.  Wrists swivel but don't bend, but that's OK - you can pose this Rey better than most The Black Series figures.  This is not OK, given the costs. 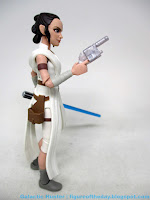 If you are a Star Wars fan, odds are you're already invested in the other scales and don't need this one.  If you just want some cool, cheap figures that are fun to futz with you would do well to give these a shot.  They're great action figures, but they may not be the figures you want due to your collecting history.  I hope Hasbro does a decent run of these and digs into the past to give us aliens, bounty hunters, and a mishmash of more.   The sculpting and articulation is a little simplified, but it's also much cheaper with a bigger bang for the buck.