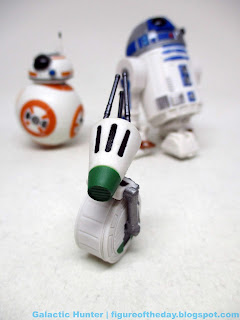 Bio: D-O was a droid who befriended the Resistance droid BB-8 some time after the Battle of Crait. (Stolen from Wookieepedia. Packaging has no bio.) 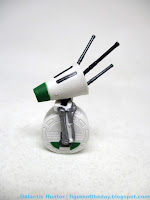 Commentary: You could probably sneak in this 5-inch scale D-O with the 3 3/4-inch figures.   It looks a lot like the movie model, and the robot Cousin Oliver is basically fine. There's a ball-jointed neck and three ball-jointed antenna which are like wily hairs on the back of the head.  The design of the wheel is clever as little ridges were added to keep the figure standing upright while maintaining the integrity of the wheel-with-a-cone design. 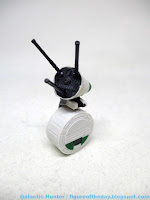 It's a nice, simple figure that is more of an accessory.  The neck moves, it stands, and it's cute - if you want a D-O, this is nice and cheap.  I'd recommend it only because I'm a fan of the format, I'll be curious to see what else they do for D-O toys and how it will work in the canon as older fans eschew adorableness as a franchise goes on.