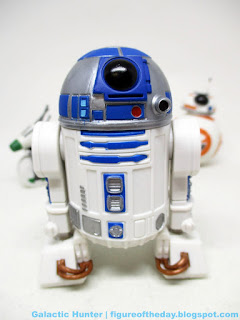 Bio: R2-D2, pronounced Artoo-Detoo and often referred to as R2 (Artoo), was an R2 series astromech droid manufactured by Industrial Automaton with masculine programming. A smart, spunky droid serving a multitude of masters over its lifetime, R2 never had a full memory wipe (apart from a partial mind-wipe by Cad Bane during the buildup to the senate hostage crisis) nor has he received new programming, with these factors resulting in an adventurous and independent attitude. Oftentimes finding himself in pivotal moments in galactic history, his bravery and ingenuity saved the galaxy time and time again. (Stolen from Wookieepedia. Packaging has no bio.) 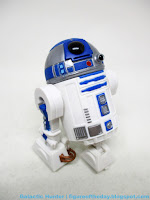 Commentary: Once again, I am infuriated by how good this is - and by a common, repeated error.   This R2-D2 figure would be a killer introduction to Star Wars toys for kids and even for collectors.   It's a simplified, cuter animated design with Hasbro's most commonly repeated problem - the circle on the top of his head is silver here, rather than blue like in the films.  Once or twice is a mistake, but Hasbro is doing it consistently enough that I am unsure how or why it keeps happening. 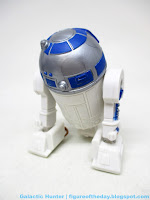 Once you get beyond that, the figure is pretty awesome.  While probably a bit overpriced in a 3-pack, you're probably going to want it.  It's solid.  The dome spins, the arms rotate, and you can pull the central leg out manually without a clicking mechanism - I think this makes it about as good (albeit different) from the Black Series release.   Detailing on the body is a bit simplified, as you'll notice details missing on the arms - but everything else is pretty darned close.  Most shocking of all are the droid feet.  For the first time ever, R2-D2 has ball-jointed ankles with some very nice black wheels on the bottom. He's even got the gold cables.  I would argue that means that this R2-D2 has the best articulation to date, as you could pose him better on sandy mountains, snowy wastes, or outside a swamp house so he can be a peeping Tom. 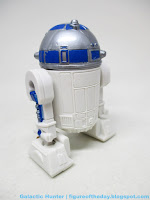 He's packed with two more droids and we'll look at those individually because we can.   R2-D2 is a redeco away from perfection - I hope Hasbro does another take with "battle damage" or a chrome/metallic silver-painted top with the blue panel filled in.  The silver plastic shows a lot of swirls, which may not be good for longevity - time will tell.  A painted dome might look incredible, as would one in Droids animation colors - hey, I can dream!    If you just want a good, chunky, and surprisingly solid R2-D2 toy I'd recommend this one.   I don't assume Galaxy of Adventures will last forever, so just go ahead and pick them up as you find them because they're good so far.  (The other droids are simple, but you wouldn't chuck them in the garbage.)