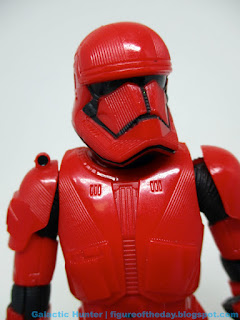 Bio:  Sith troopers were a stormtrooper variant that served the First Order during its war against the Resistance. Named after the Sith, an ancient order of Force-users devoted to the dark side of the Force, these troopers were the next evolution of Imperial/First Order stormtroopers. They wore red-colored stormtrooper armor and wielded a type of black and red blaster rifle.[ (Taken from the figure's packaging.) 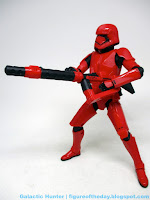 Commentary:  Combining elements of various Stormtroopers and the Elite Praetorian Guard, this Sith Trooper came out as an SDCC-exclusive preview figure, as many have before it.   With no context, it's also only vaguely interesting, just like the others that come before it.  I and many others come to (and stay with) this hobby because we love Star Wars - and this isn't quite Star Wars yet.  It will be, but right now it's just another figure in a box that I don't have much emotional attachment with beyond "hey, new toy."   "New toy" wears pretty thin after a while, so it's good that hasbro made a worthwhile figure - even if it is somewhat packed with riddles. 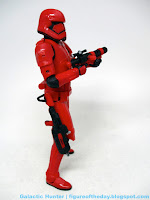 It's not far off from the ridiculous goodie bag that was Amazon's First Order Stormtrooper a few years ago, as this one has two blaster rifles, a grabber of some sort, a sword, and what I assume is a grenade launcher or flame thrower.  I don't know weapons, and while it looks more or less like the released photographs there's not much we can say about its overall personality beyond "yup, it's a trooper, and it's pretty cool."  There's a camera-like dongle on the right shoulder, the helmet has a ton of grooves - as does the chest, and you can see influences from previous troopers everywhere.  The belt looks a bit like the First Order troopers and so does the "OII" on the back.  Heck the "O" looks a bit like a Death Star now, and for all I know that's significant to the plot as we know a crashed Death Star works into the new movie.  He also has asymmetrical knee armor, not unlike the original trooper.  There also seem to be more greeblies than usual, which reminds me of the Scout Trooper.  There isn't a ton of precedent for red Stormtroopers, but the Crimson Stormtrooepr [FOTD #2,249] comes to mind. 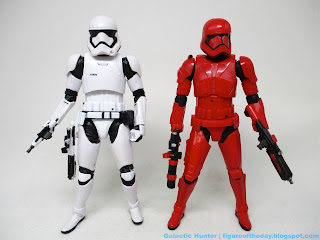 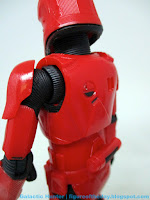 The engineering of this figure is great.  The elbows have a wonderful range of motion, and the hands can grip the weapons.  The knees are double-jointed, and Hasbro put in each point of articulation in an inconspicuous location.  The chest cut works.  The shoulders have added rubbery pads to hide the joints on the black body glove.  Hasbro even improved the hip joints, allowing the figure's limbs to swing forward without looking like the t-crotch vintage Kenner toys. 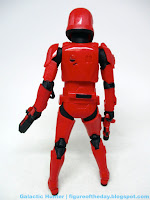 The accessories are a bit of a mystery - the two blasters are great, with black and silver highlights. They can plug into the trooper's thigh as with previous releases.  The blade doesn't seem to plug in anywhere, and it looks pretty sharp with a silver element to it.  This weapon looks cool, maybe it's significant to the movie like the riot baton was.   The grabber claw is also an oddity - the claws open, but why is it here?  To reach canned items on the top shelf?   To grab something burning with Sith magic?  Is it a discarded concept, a red herring?  That remains to be seen!   The big gun is a bit awkward, but he can get his hands on it and look like he's not a complete goofus carrying it around.  I think.  It really is a bit large.

The bonus accessories make for some added fun, probably, but I am unsure what role they play in the film yet.  I wouldn't say it's worth the $12 bonus cost - or more on the secondary market - but I'm glad to have them as I'm obsessive about such things.  I would recommend getting yourself a 6-inch Sith Trooper, even if it isn't the comic-con version.

Collector's Notes: I got mine from Hasbro's San Diego Comic-Con 2019 booth shop.  One lighter on accessories should be in stores near you today if not tomorrow.