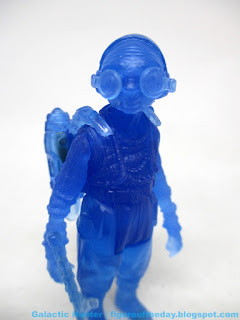 Bio: Maz Kanata was a Force-sensitive humanoid female who was born over a millennium before the brewing war between the First Order and the Resistance. Living in an ancient castle on the planet Takodana, Kanata gained a reputation as a "pirate queen" by allowing traveling smugglers to reside in her home—as long as they honored her prohibitions against politics and war. (Stolen from Wookieepedia.  Packaging has no bio.) 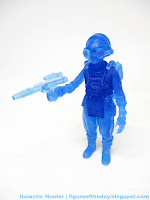 Commentary:  Things don't go as smoothly as you hope.  This Holographic Maz Kanata was going to be US Toys R Us exclusive. Then Toys R Us closed - so Hasbro offered it to Entertainment Earth.  They neglected to ship it there, so then they just kind of filtered out and showed up - a friend of mine found them in those seasonal calendar stores.  I never saw them anywhere, so I got my set from a UK eBay seller.

Given how over the sequel movies most toy fans were - in part because of the repetition, repetition, and repetition in the line - I bet a lot of people don't know and don't care they're missing this set. The only truly new figure in the set is Maz, a holdover from The Last Jedi that saw release for Solo which was recast here in blue, with no paint.  This would've been a better carded exclusive - the detail is great, and the blue is darker than a lot of the holographic figures from the heyday of the format from 2005-2009. 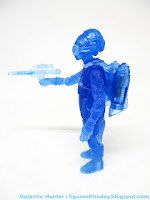 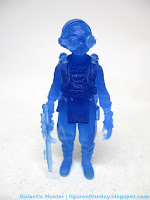 She has 5 points of articulation, and has no problems standing or sitting.  It's a quality figure, the engineers of the old Kenner line would be proud of this one.  The backpack isn't removable, and I'd go as far as to say that this is a pretty nifty figure in a style we rarely get these days.  I probably paid too much for this set, so if you get it at a good price, you're a winner.

Force Link 2.0 Notes: "I am no Jedi, but I know the Force."  "I assume you need something.  Desperately."  Blasters. It's not much new here.