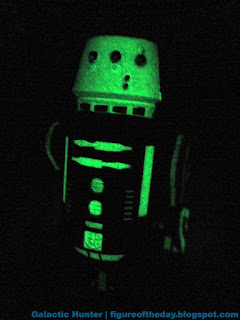 Bio: All different types of Astromech droids populate the Star Wars galaxy.  Each droid is different and has their own unique personality and colors.  This droid awaits his fate in the dark and formidable bowels of a sandcrawler.  Join R5-BOO19 on his adventures throughout the galaxy.  May the Force be with you... and your Droids!  (Taken from the figure's packaging.)
Image: Adam's photo lab. 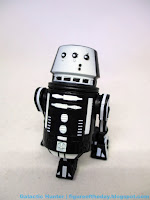 Commentary:  The holiday droids seem to be feast or famine - sometimes they get expensive.  If you want R5-BOO19 I would recommend getting it early, because it glows in the dark and the last glow droid got expensive.  The holiday and other special droids tend to be a mix of totally goofy or completely sensible as appearing in the movies - this is one of the latter.  Disney designers threw it in with the Sandcrawler droids, and it just plain fits.  The glowing is a bit over-the-top, but the white glow paint looks subtle enough that I wasn't entirely sure that it did glow until I took it in a dark room.  The front and back of the figure are loaded in glowing elements with lots of stripes and boxes, making for a skeletal costume over a traditional robot body.  It's brilliant. 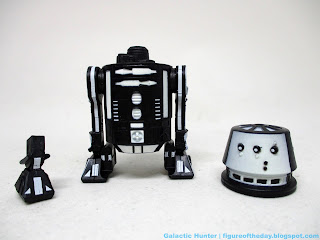 The figure uses the same post-Hasbro R5 body we've been getting for years. There are no wires molded to the feet, and each limb is pretty much painted the same way - you can swap right and left legs and not notice a difference.  The black body has some silver highlights in addition to what appear to be two different glow paint colors - they look different under UV light.  The interior of the droid eyes seem more blue under UV light, while other details seem more wint-o-green. 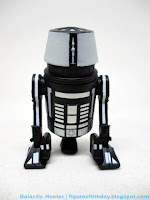 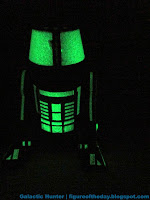 This is a favorite.  We've had a few of these so far, and they've been pretty sharp.  We've had a glowing "ghost," a candy corn droid, and one that was... uh... black with purple, green, and orange.  I don't know what it is.   I assume we can and will see an orange jack-o-lantern eventually, and I love that we got two different glowing robots so far.  I can't wait to see what we get for 2020!   Also as I write this I found out I missed R5-D23 - I had no idea that was a thing. Well, shoot.

Collector's Notes: I got mine from my pal Shannon - who threw in an awesome set of Han's Dice in the box. Thanks Shannon!