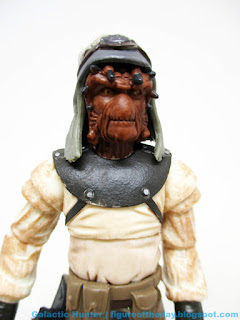 Bio: Vedain was a Kajain'sa'Nikto slave owned by the Hutt crime lord Jabba the Hutt during the Galactic Civil War.  (Stolen from Wookieepedia.  Packaging has no bio.) 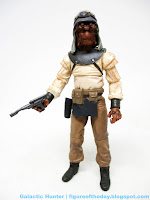 Commentary: I'm surprised we got this one - and so many flavors of Nikto!  In the 1980s we just had one of these guys, but now we've got at least four distinct versions of the species, almost all of which wear the same rubber mask - or close to the same.  Vedain has a claim to fame fighting Lando Calrissian for control of one of the skiffs during the battle in the desert, which means he's going to get fed to the giant tooth hole.

We've had precious few new Return of the Jedi aliens in recent years.   What makes this figure amazing is that it's not entirely new - the head seems to be adapted from a previous release.  The arms are from Nikto (Skiff Guard), the legs are from a Weequay, but the torso is seemingly new.  Hasbro managed to give us a repaint with a minimum of new pieces to scratch the itch of "new figure," which would be impressive if it weren't forced with two other existing figures in a set.  A lot of fans will want all three, but as a group it's not terribly exciting and stands as proof we'll shell out for one good new figure, even if it isn't all that new. 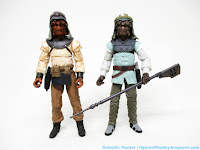 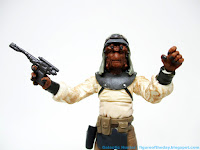 Complete with 2011 copyright stamps, this is a nice figure - but not as nice as 2019 releases like Klaatu and Yak Face.  You don't get the swivel thigh joints or lateral leg joints, it's standard 2010-ish fare with 22 points of articulation mostly cleverly hidden in clothing creases.  It's remarkable from a product development standpoint, as we got what we wanted - a new Skiff Guard - and Hasbro got what it wanted - a repaint.  It's a good compromise.  It's halfway happy. 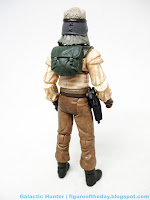 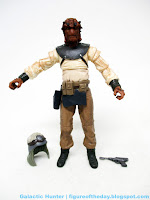 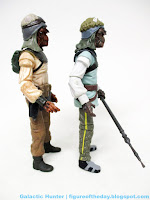 The figure has no problems holding the blaster or wearing what appears to be a new hat.  My sample stands just fine.  I'd love to say something catty about the figure itself, but can't - the hands are painted well, the outfit is a good use of existing parts, and it's a new Jabba thug.  These are all things I like.  I hope we can see more between now and when the line becomes completely unprofitable.