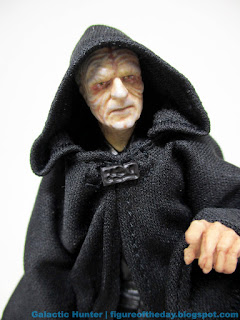 Bio:  Scheming, powerful, and evil to the core, Darth Sidious restored the Sith and destroyed the Jedi Order.  He slowly manipulated the political system of the Galactic Republic until he was named Supreme Chancellor - and eventually Emperor -- ruling the galaxy through fear and tyranny.
(Taken from the figure's packaging.) 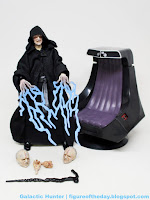 Commentary:  This was a significant improvement. I didn't see much reason for Hasbro to bring back Emperor Palpatine (with Throne), but I'm glad they did.  I'm not thrilled at it costing twice as much for a chair and two heads, but that seems somewhat consistent with how Hasbro does these things.  (For $10 less, I'd say it's essential.)  It's really neat, though, and it's better than Hasbro made it out to be.

Hasbro gave us some new parts with this one - the cloth robes seem to be a new pattern, with new cloth lower robes so the knees can bend. The original release had plastic robes over the lower legs, preventing seated poses.  The other plastic elements all appear to be very similar, with a somewhat bulky clasp on the robes and some wonderfully expressive bend-and-swivel hands plus rocker ankles.   This is a figure that just plain works perfectly with the throne, too. 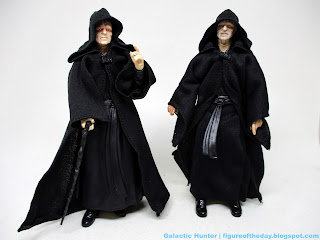 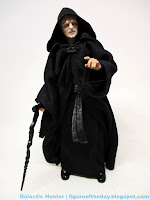 The Emperor's default head is the same as before with an all-new paint job. The 2015 edition had mostly unpainted skin and yellow eyes. The 2019 edition has more realistic eyes plus much more texture  highlights - almost dirty - over the skin to simulate older, decaying cells.  The Dark Side definitely hit this figure hard, and you can see it on all three faces.  There's a standard one that's great, an angry one, and an absolutely perfect smiling/cackling one that I have on his neck as I write this. They're all excellent for different reasons, and it's almost a shame I have to choose which one gets displayed.  These are marvelous options and as Hasbro rarely gives figures alternate heads, it's a real treat. 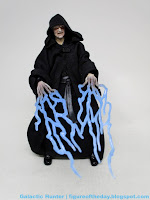 The hands are about the same - one gestures with pointed finger, and the other is designed for the cane.  New this time, though, are bonus hands with Sith Lightning shooting out of them. The sculpting is good, but like many sets of Palpatine's hands they share the same shortcoming. The paint of the fingers merges into the bolts, so it looks like he has weird morphing hands instead of hands shooting out energy.

It's a hard look to get right, the 3 3/4-inch line was usually successful by making plug-in lightning with hands (or sleeves) with a hole in them.  This gets the job done, but admittedly, it's a weak spot on an otherwise sharp figure. 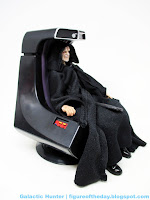 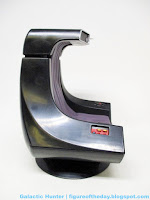 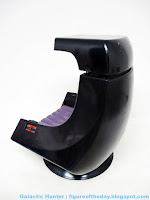 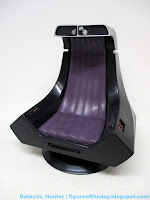 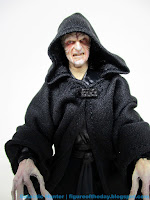 The selling point is the throne itself - a very big chair with a base. It doesn't do much other than look cool.  Hasbro hasn't made a lot of these, so seeing painted detailing like control panels and little tidbits on the top of the seat were a surprise to me.  Mine had some weird silver slop on top and on the back, so it's a perfectly good accessory but it's so odd to get a brand new toy that I pre-ordered and parts of it look almost used.  Unless the scuffing was by design, in which case it's amazing - but I doubt it.  It's just a little off for a mint-from-the-box accessory.

I'd recommend you get it for an Emperor Palpatine that's probably as good as you'll get at this size around this price.  I'm sure there's room for a Darth Sidious with Lightsaber some day, but for now this is a top-notch figure and a shining example of Hasbro's capabilities.   I can't imagine we'll get too many more "deluxe" figures like this, but I hope we get a few more gems at a slightly better price.  I mean, the Speeder Bike with Biker Scout wasn't more expensive than this and I'm confident there could be a lot of fun with Deluxe Admiral Ackbar or especially Max Rebo.