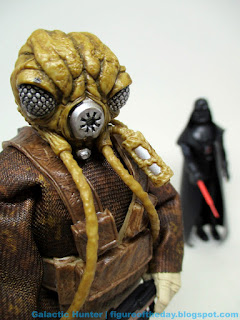 Bio:  A Gand bounty hunter. Zuckuss heeded the Empire's call for mercenaries to locate the Millennium Falcon and bring her fugitive crew to justice, receiving his orders on the bridge of Darth Vader's Super Star Destroyer.  (Taken from the figure's packaging.) 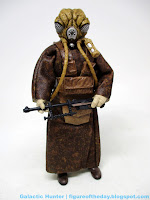 Commentary:  You already know you need or want Zuckuss, which started as a Toys R Us exclusive. Toys R Us closed, so it became a Disney Store exclusive. Disney Store didn't take the whole run, so some wound up at Entertainment Earth and elsewhere.  It's a new mold - and new mold exclusives are scarce.  I'm kind of surprised they didn't just roll it in to the main line.  It's good - but it got marked down, probably in part because of what seems to be Star Wars ennui and/or people like me who waited to get it online because Disney Stores went from ubiquitous to inconveniently located over the past 20 years.

The figure seems to be a new body that's a lot shorter than most figures wrapped in a faux-weathered faux-leather robe.  Along with the classic gown for Leia, Zuckuss is one of very few figures covered in cloth which does a great job hiding his joints.  You can't see the double-jointed elbows, the bend-and-swivel wrists, or the laterally moving hip joints.  Thanks to this design, he can hold his rifle like in the movie with the left hand gripping the trigger area and the right hand wrapped around the barrel.  The fake-weather-printing looks wonderful, and the gloved hands look really good.  So does the head - there's a lot of detail here, with lots of gizmos and tubes and just about anything else you might want.  Hasbro and presumably Lucasfilm/Disney seem to have used significant reference to make this figure look good, with just dreadful skin on the head being recreated to look even better than your imagination thought. 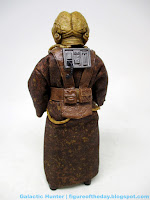 A lot of work went into sculpting the plastic figure under the robes you'll probably never see - I don't want to dismantle and rewrap this, so I'll just enjoy this stable, nice-looking, correctly-scaled alien.  It does the pose I want with no fuss, and the detailing is gorgeous - I don't think it needed the $5 mark-up, but I guess that's what clearances were for.  This is a figure you'll probably buy, slap on a shelf, and never touch again - and it's a good one.  Hasbro did a marvelous job on a figure that could have been a small statue, so rest assured this is a very good execution of the character in this format.  The format, by design, doesn't do much fun but for a thing you can pose or look at it's superb.

Collector's Notes: I got mine from Entertainment Earth.    Disney Stores have had it for as little as $9.99.