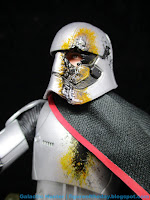 Bio:  Captain Phasma and a squad of elite First Order troopers capture Resistance heroes Finn and Rose, who have infiltrated Snoke's flagship, the Supremacy. Before Phasma can eliminate them, a series of unforeseen events leads to a dramatic battle between Phasma and Finn.  (Taken from the figure's packaging.) 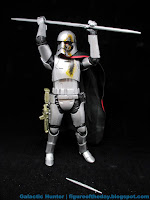 Commentary:  It's an upgrade!  Captain Phasma (Quicksilver Baton) is an upgrade of the Captain Phasma [FOTD #2,254] from 2015 - if you have it and like it, this one is a lot like it.   The core body of the figure is the same, except there's a new head, a cloth cape replaces the plastic one, and the helmet is new.  Also you get two batons.  If you only have to get one Phasma figure I would argue this is the more interesting of the two, but the first release is much cheaper.  This Quicksilver Baton version may also be on clearance at a Disney Store near you - you'll have to go check. 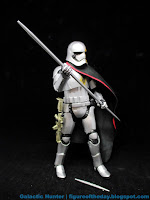 In terms of deco, Phasma now has awesome armor burns from the end of The Last Jedi, which I assume will forever be known as "the controversial one (without Ewoks)" to older fans.  I like the burns - Hasbro did a wonderful job printing them on the armor, and what really sizzles is the new helmet with the crack revealing the face of Gwendoline Christie.  The carefully fried-out lens has this amazing paint job around the edges, burned and shattered all at once.  You can see a new-style-printing eye under there as part of the human flesh (plastic) head, but the helmet itself is glued down.  You can't see anything outside the eye area without carving or prying it off, and I'm not about to do that.  Even though it's basically "a new hat" figure, it's extremely impressive.  Short of doing some silver vac-metal chrome on the figure, I'd have a hard time imagining something cooler you could have done to the existing mold to make it a worthwhile upgrade.  This is fantastic. 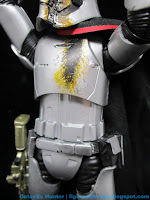 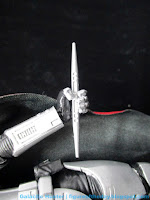 To fight Finn, Phasma whips out a silver thing which magically blows up to a big ol' staff.  Rather than try to make some fragile, telescoping accessory Hasbro opted to wisely just include two one-piece weapons. Each has little indentations in it and are painted silver. There's nothing particularly fancy in terms of deco here, and you could probably fudge these with toothpicks and silver paint from the Michael's down the street.  I appreciate Hasbro included two of them, because I am lazy.  Phasma has no problems holding these.  She also includes the same blaster pistol from the 2015 release, which similarly plugs into her hip or can be held in her fists.   The downer here is there's nowhere to safely stow the small or large baton, so you'll need to keep close tabs on those. 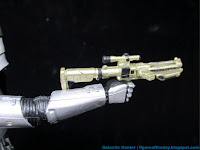 If you've had enough of the First Order and variations on armored people, you obviously have no need of this figure.  However, if you want the very best Phasma at this size and price point, this may well be it - it's a nice counterpoint to the disguised Finn and the cloth cape is a lovely bonus.  As I get older I wouldn't necessarily recommend you buy absolutely everything in all styles, but if you want a good Phasma this is a decent one.  It's just not the cheapest one.