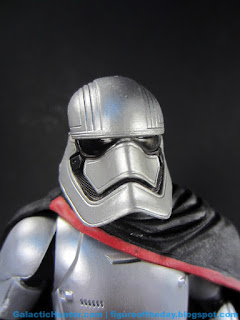 Bio: Imperial Sandtroopers carry out the will of the Emperor in the harsh, arid environments of the galaxy's desert worlds.  (Taken from the figure's packaging.) 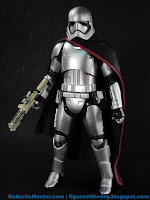 Commentary:  The world is changing!  One of the most sought-after figures in the line - despite knowing nothing about her - is Captain Phasma.  She might only be in the movie for 30 seconds, but nobody cares - chrome stormtrooper?  Yes, please!  This is the kind of thing that gets people excited, plus it's another entry to the positively tiny club of women in Star Wars that have a speaking role.   Granted, some will argue "it doesn't count!" because she's covered in armor but I disagree - adding women to the stable of armored badasses in the series is a good thing for all involved.  Nobody goes around saying Metroid's Samus Aran doesn't count because she's dressed like a cyborg. 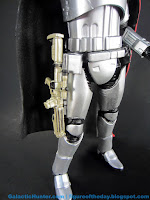 Phasma is, basically, a very tall Stormtrooper painted in a shiny - but not reflective - finish.  It looks pretty good, and it won't show a reflection if you in your underpants taking a picture for your figure review site.   The nuts and bolts are very similar to the Stormtrooper, but the tube connector is missing from the helmet and the shoes are more boot like with higher heels.  I don't know if the intent was to play on one's mother wearing combat boots, or high heels, or just a new design entirely but given how similar the figure is to the rest of the troopers, a change here was certainly a curious surprise.   She stands fairly well, but the elbows suffer like her squadmates - the black body glove oddly covers the lower elbow, restricting movement and preventing a good bend.  Thankfully the wrists are great with bend-and-swivel articulation, but bum elbows on a 6-inch figure really hurt how you're going to pose this figure on your desk.   (Let's not be coy.  Nobody is really "playing" with this scale.)

Her blaster fits securely in her hand or plugs in to her thigh, and the red-trimmed black cape looks pretty snazzy.  Hasbro did a bang-up job delivering a figure that's absolutely gorgeous in the packaging, but once you open it it offers little new and isn't as good as it could be in terms of articulation.    If you're making a small, cheap figure articulation is arguably less important - but at this scale, and the audience of older collectors, it'd be nice if she could easily and non-awkwardly carry her blaster in two hands.   None of this matters, of course, because people are running out to buy her, overpaying on Amazon, and ultimately this is a toy that will sell no matter what.  Fans love new armored dudes - and now dudettes - so odds are Phasma's ability to sell will continue for years to come.

I actually found two of her at my nearby Walmart, but I ended up selling both and sticking with the 5 POA version. It looks just as good, even if it doesn't have all the articulation.