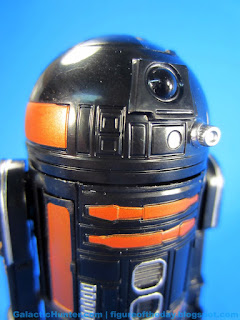 Bio: Entrusted with the secrets of the Emperor himself, this Imperial R2 unit once thwarted a plot to turn every droid aboard the second Death Star against the Empire.  (Taken from the figure's packaging.) 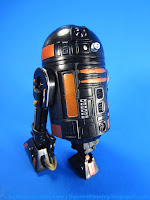 Commentary:  What's so funny about peace, R2-Q5, and understanding?  Tradition!   The first original trilogy-based "repaint" (it wasn't) of R2-D2 didn't come until after the first prequel - we had R5-D4, R2-R9, R2-A6, and R2-B1 but the only proper round-domed original trilogy droid figure was R2-D2 until 2001.   What more appropriate figure could there be to kick off the 6-inch scale R2-D2 repaints?  I couldn't think of a better choice.   After all, the first law of toys is that you always make a black repaint.  Kids love those and deserve their dark, brooding R2-D2s.  And you needed another Imperial guy for the set, so here it is.

If you know anything about me, you know this is one of the first thing I ask for.  What's that?  An interesting R2-D2 mold?  Let's repaint it!   I mean, if I see a blue droid I want to paint it black.   The deco is a bit truer to the recent release at Disney parks, but is even closer to the actual movie photos we're seeing.   The black is very glossy, the central vents on the chest are outlined in silver, and the painted panels are, to say the least, vibrant.   What's more, the opening panels reveal arms that are actually painted.   I don't mean just painted silver, either - the claw arm has a gold trimming, while the other arm has some added grey.   Admittedly, it may not make up for the loss of the various sensors and scopes (or the lightsaber from R2-D2) but it's certainly a nice surprise I wasn't expecting. 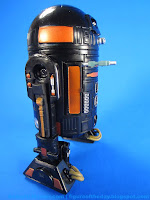 Obviously this is not a $100 high-end replica, but for the asking price I'm pretty stoked with this little guy.  The Empire has been getting  a lot of figures in the 6-inch line so far, and I'm hoping it gets more - figures like this keep things interesting while Hasbro has to balance redeco concerns with all-new figures.  If you're going to have to do a repaint, repaint a droid.   It'll make me happy, every time.