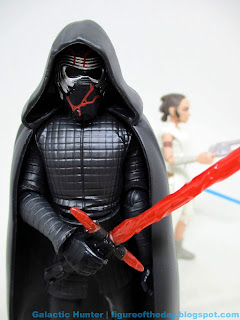 Bio: Kylo Ren, a Force-sensitive human male, was the Supreme Leader of the First Order and master of the Knights of Ren during the New Republic Era. Once a promising student of Jedi Master Luke Skywalker, the former Ben Solo was neither Jedi nor Sith, but a product of both sides' philosophies. Though trained in the ways of the dark side by his predecessor, Supreme Leader Snoke, Ren still felt the pull to the light and consequently struggled to overcome the conflict within himself. Ren idolized his grandfather, the Sith Lord Darth Vader, and aspired to become just as powerful. Driven by ambition and the desire for greater power, he believed it was his destiny to rule the galaxy.   (Stolen from Wookieepedia. Packaging has no bio.) 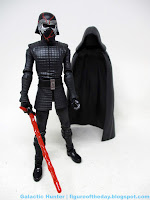 Commentary: Much like Rey, this Kylo Ren from Galaxy of Adventures is a decent, 5-inch stylized figure smooths over some of the details from the film, but is a pretty good recreation of what we've seen as the movie costume so far.  It's basically a hooded cloak over The Last Jedi costume with a fixed-up helmet and a lightsaber - it's a good, recognizable figure.

Like Rey, Kylo Ren has 23 points of articulation.  His wrists are a little tilted, so they swivel but don't bend beyond their molded position.  This is pretty good for achieving nifty lightsaber duel poses, especially since the arms also have a great range of motion and the lightsaber itself is pretty striking.  The exaggerated energy crackles really look awesome on this version of the weapon, which comes complete with a chunkier-than-usual hilt.

The lightsaber is more or less perfect, with a thick  black hilt and some nice wiring painted on the grip. The cloak has a hood, not unlike 1990s Jedi Knight Luke Skywalker figures.  It's fine.  It's not fancy, it won't do much to hurt the figure standing on a shelf.  I can't say I would miss it if it were gone, but it's good to have to add some heft to the rather skinny figure. 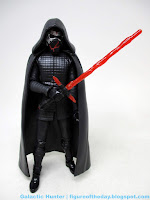 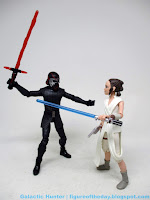 Kylo's ankles are a little more difficult than Rey's, meaning you might have to take some care to get them just-so.   The rocker motion and general range of movement are good, but getting things to get in place just right so he doesn't fall over may take some work.  The results are striking - he looks awesome swinging his blade, and I find myself wishing this is the format we got in 1995 instead of 3 3/4-inch redux at times. Could you imagine hundreds of these guys, with vehicles and playsets?  It's a pity that will never come to pass, but at least for now we have some very good, nicely-priced toy figures.  I can't believe I'm saying "you should buy this Kylo Ren figure," but it's good enough where I can't dump on it.  Good size, good quality, good price... but if you're avoiding new scales, stay away.

When do they learn that masked heads should be larger than unmasked heads?