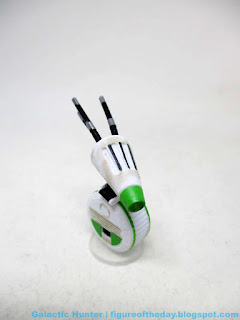 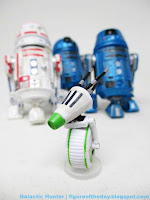 Commentary:  The Rise of Skywalker feels like a dull thud after years of hard work, the culmination of wonderful designs and masterful storytelling in the form of a thing that just sort of exists.  At the center of the not-a-merch-juggernaut was D-O, the Cousin Oliver of droids.   Smaller, needier, and developed as a puppy to follow around BB-8, the character was sort of a non-thing.  I would be very interested in knowing how the droid developed in terms of what the movie intended it to be, what Disney Consumer Products wanted it to be, and if either party influenced one another in the process.  I'm guessing it was always kind of nothing and they made a ton of merchandise for it anyway.

Hasbro didn't make a 3 3/4-inch scale D-O, but Disney did - and this is it, and it's really good.   It seems to have some of the best sculpting and deco, with extra greeblies under the black eyes,* more paint on the "hair," and added decoration on the wheel and body.  It lacks the silver on the rod joining the neck to the wheel body, but aside from that they did a nice job making sure it looks excellent.  If you just need a droid to stand around, this is it. 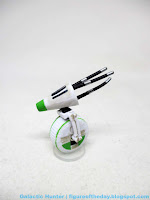 What really surprised me was that the stand wasn't necessary - a clear base can plug in a hole in the rolling wheel, but that same hole is just big enough to serve as a flat base so D-O can stay put on your shelf.  That's impressive.  Less impressive is its articulation, a swivel neck can rotate and the wheel can rotate as well. That's it, that's all this does.  You can pull the head off if you like too.

I look forward to seeing what Hasbro does for D-O in this scale down the road, but until then this one is really good.   Disney's BB-8 and Chopper were also arguably superior, so this is a worthwhile set.

Collector's Notes: I got mine from my pal Shannon.  And * - mine seems to have been painted incorrectly, with the black eyes off the marks.   If you have a chance, look at the eyes before you buy yours.

I find your lack of Jojo's references disturbing.