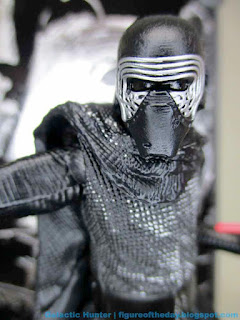 Bio: A dark warrior storng in the Force, Kylo Ren commands First Order missions with a temper as fiery as his unconventional lightsaber. (Taken from the figure's packaging.) 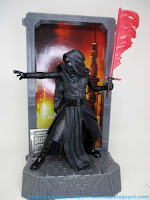 Commentary: I've been meaning to open this one for a while! This Kylo Ren came out millions of years ago, back in 2017. Remember 2017? At that point Disney had spearheaded only two movies - which at the time were largely loved - and Rebels, at which point fans were more or less on board. Hasbro was riding high before overproduced items started to back up at retail, and before fans started to bristle at the idea of lining up all day to buy some toys. We got some neat stuff - these guys were a riff on Titanium Series figures from nearly a decade before, which came in giant Sea Monkeys aquariums, cost about the same, and were also pretty cool. The 2017 ones riffed a bit more on the collectible statue angle. 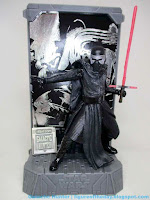 Kylo Ren was arguably better than the basic figures, as he has ball-jointed shoulders and swivel wrists. The legs and torso are metal, and there's no leg articulation to speak of - you can swivel the waist. What I love about the figure is that he draws inspiration from a moment in the 2015 film that absolutely riveted me the first time I saw it, when Kylo Ren used the Force to freeze a blaster bolt in place while giving Poe Dameron the business. (This has since been swiped in Star Wars Visions.) A bigger The Black Series monument/statue would also replicate this moment, debuting at $50 but dropping to an oh-so-fair $24 these days. But I digress - this little version lacks the bolt and scenery, but you get an awesome weighted figure that stands freely and has a genuinely lovely "swooshing" lightsaber in addition to a normal one. And a second helmeted head, meaning no Adam Driver, a pensive bison who may sneeze in your McFlurry. 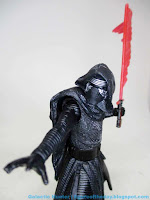 The figure part has the cape and general look and feel if 2015, but has some silver paint highlights. I assume this is to remind you he's metal, if the weight wasn't enough to do it. The figure stands nicely but includes four tiny foot pegs you can plug in his base, which features a reversible backdrop.

With the endless products and increasingly tired fans getting pulled in multiple directions it's no shock this - and almost everything from the first few Disney movies - came out in abundance and sat a bit. Which is a pity - it's good! It's a bad toy, but it's an excellent little statue for your desk and you can connect them together to form a bigger diorama. The photo backdrop is nice, but so is the etched foil portrait on the back that reminds me a bit of 1990s Topps foil chase cards. I think it was a mistake to brand these as "The Black Series" - Hasbro branded everything aimed at adults with that name - because these were secretly very nice figures. Compared to the then-$8 plastic guys on shelves, you got some nice extras that would've probably done better if given better packaging and maybe a better display environment. This is also one of the few figures in the format that's not arguably worthless, so clearly the free market agrees with me that it's pretty good. The sculpting is sharp, the pose is nice, and I'd say you should track one down on the cheap if opportunity permits.