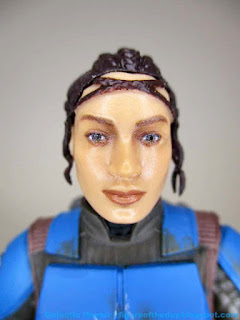 Bio: A master of hand-to-hand combat, Koska Reeves is loyal to Bo-Katan and is a member of a band of Clan Kryze Mandalorians striking back at the Imperial remnant. (Taken from the packaging.) 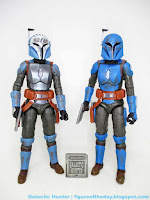 Commentary: This is a good one. Koska Reeves is a redeco of Bo-Katan Kryze [FOTD #2,785] with a new head, but that's what she should be - Hasbro gets to save a few bucks, and we get a figure wearing basically the same armor. Articulation is exactly as good as it was before - which is to say, pretty dang good - and the only molding changes I've noticed are a new belt (one holster) and a new Sasha Banks head that will allow action figure fanatics to argue the merits of Hasbro's version versus Mattel's WWE edition of the performer. Koska the Hasbro figure is great, and if you see her, you should get one. This is the kind of thing you'd start a fistfight in the toy aisles over in the 1990s if they made her. 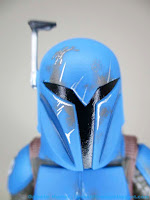 Much like Bo-Katan she's a good - but not perfect - representation of the figure. Hasbro's increased figure budget apparently hadn't trickled down for this one, as you can see her armor has none of the silver scuffing, but a lot of the dark black scuffing on it. The blue is wonderfully vibrant and really stands out on the mostly earthtone brown sludge that is most of Star Wars' costuming. The owl symbol on her shoulder pops nicely, the straps on her shoulders look great, plus she has nifty brown boots. The sculpting is sharp, and the head totally looks like the her - but the figure's eyes could be a smidgen darker. The hair looks like the on-screen hair too, and it's notable that it is a separately molded brown piece so there's no weird "doll hair" paint job. She also has a sharp little ponytail and hair dangling in front of her ears. Given Star Wars penchant for distinctive hair, it's rare you get something that seems so hard to translate to an action figure yet turned out so well. It's good. 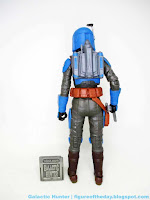 Ms. Reeves also passes the Landspeeder Test in that she can actually swing her legs forward and sit in a Landspeeder. She stands, she sits, she can hold her blasters, and the helmet fits like a glove. (Or helmet!) It's funny, and sad, but things we took for granted as kids are now genuine concerns. Back when I got old Kenner figures, pretty much every figure would fit in every seat (minus a few like Ewoks, Anakin Skywalker or Amanaman.) Figures could hold their guns, or their helmets would fit - and in the modern era we've had a lot of figures incapable of things like fitting in their own vehicles. (Looking at you, Zam Wesell's Speeder from 2002.) It's no secret that Lucasfilm has been trying to figure out how to increase its audience with women, both as audience members and toy fans, and they seem to have finally nailed it with The Mandalorian - which is arguably also the show that tries the hardest to meet the exacting standards of the original generation of young boy fans who are now 40 or older. Heck, this very wave of figures included a repack of Bo-Katan along with Aurra Sing, which is kind of remarkable when you look at the old Kenner line which had preposterously few woman-presenting figures. Leia, Sy Snootles, Kea Moll, and that's pretty much it. It's great to give fans more awesome options for stories, which in turn brings in more collectors, more convention cosplay, and more future generations of kids into this kind of stuff so we can hopefully keep collecting.

Confidential to Hasbro: I got this figure the same day Metroid Dread came out, so Samus is on the brain a bit. Should Jakks Pacific abdicate the Nintendo license, please put whoever engineered this figure on a Samus Aran figure of your choosing. Please, and also thank you.