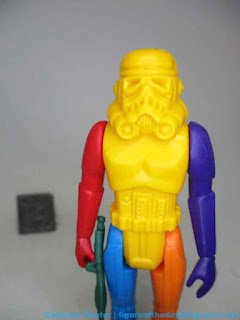 Bio: This stormtrooper figure is inspired by the colorful prototypes that enable the development team to look past the deco and focus on the sculpt, analyze mold alignment, and adjust for quality. (Taken from the figure's packaging.) 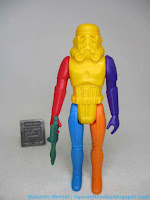 It's new! Ish! There are six flavors, and the blaster pistol comes in one of six colors. Like many other retro Kenner Stormtroopers from the 21st century, these don't grip their blasters too well either. I'm particularly fond of this one because the yellow reminds me of Droids C-3PO - one of my all-time favorite weird repaints! This figure has 4 joints, just like the old Kenner figure, and the colors are nice and garish. 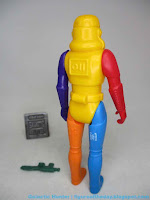 While prototype figures do exist in a wide variety of weird colorways, I don't know that I saw any or heard of many in this many random colors - it's a bit of a fiction that this is likely to match an actual prototype, but whatever. It looks cool, and when it comes to any and all toys aimed at collectors, the story behind it can be as important as how cool it looks. If this figure just popped up as "exclusive Stormtrooper" in random colors, you'd be angry. But at $14, on a shiny foil package, with interesting and repurposed faux-comic art, it's actually quite cool and seeing an unpainted Stormtrooper really does give you an appreciation for the sculpt. (Heck, I've written so much about my armies of The Outer Space Men repaints.) Even though there's no story, the idea of a prototype figure that you can buy yourself is quite appealing. (I'd love to see some 6-inch ones.)

In an alternate, better timeline you probably would have seen this figure debut at New York Comic Con at the Target booth - or through their partner there - and then a few would trickle out online or to stores. In this timeline, said partner bypassed the convention - heck, most companies with exclusive toys did - so you're on your own online or in brick and mortar. I'd say it's a good figure, but these things do feel a whole lot less special when you get two within a couple of months. I still like it, but I hope Hasbro waits 1-2 years for the next one. Get it if you can find it.

Collector's Notes: I got mine at Target.