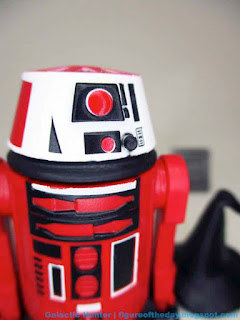 
Bio: All different types of Astromech droids populate the Star Wars galaxy. Each droid is different and has their own unique personality and colors. This droid resides at the mysterious world of Dathomir and is known to aid a coven of witches in their gifts of wielding dark magic. Join R6-W1CH on her adventures throughout the galaxy! May the Force be with you... and your Droids! (Taken from the figure's packaging.) 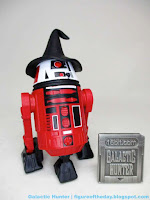 Commentary: The sequel trilogy didn't take too much from the pre-Disney Expanded Universe and put it on-screen, but it did take the R6 droids. This is good, because now we've got R6-W1CH, the 2021 Halloween droid that somehow got this name rather than it being used for a sandwich in the restaurants over there. The deco is new, the hat is new, the droid mold is not. And of course, you probably want one. 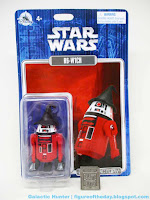 The witch droid has black feet, red legs, a red body, plus lots of black and white highlights. The dome is white, with red and black highlights. Her coloring actually doesn't look too far off from Mother Talzin, who I assume will never get an action figure, as the droid dome matches the witch-in-chief's make-up without being a precise copy. At least, I assume it's make-up. Her big red eye seems a little out of character for most astromech droids, but from behind this figure screams a 1970s Lucasfilm design - just look at all those black and red panels! She totally could be hanging out off-camera in a Rebel base somewhere. The black feet do a good job of hiding the lack of wires, the red arms have subtle silver greebles on them, and she just looks more ornate than most releases. Unlike last year's little pumpkin, this droid may not necessarily read as a witch from a first visual glance - but with the hat, I mean, it makes sense. 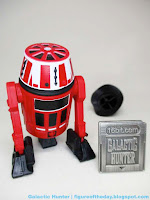 The hat is new - it's got a nice pointy witch hat, bent down because why the heck not. It's optional. I think it helps sell the witch image, but the good news is if you lose it, you've still got a very Star Wars-y robot - more so than most past holiday exclusives. As much as I love the glow-in-the-dark R3 unit, I don't buy it as something in the Star Wars galaxy. But this red robot R6? This feels more authentic than a lot of on-screen designs we've seen.

Even if you skip all the holiday droids, you should get this one. It looks good, and it looks like it belongs with your other figures. And thank your lucky stars it's not as scarce as R2-RN8W from the "Rainbow Collection" earlier this year, which I didn't have a crack at and hope to someday get. Get this droid while you still can!

Collector's Notes: I got this from Kerry, who got it from Disneyland. Thank you Kerry!