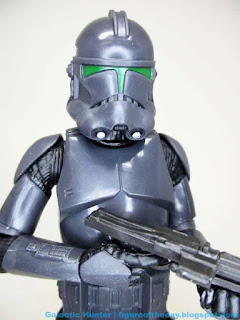 Bio: After the formation of the Galactic Empire, a small group of highly skilled enlisted recruits is tasked with neutralizing anti-Imperial insurgents throughout the galaxy as a means to prove the effectiveness of conscripted soldiers. (Taken from the packaging.) 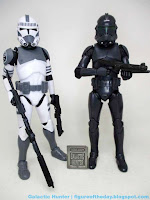 Commentary: Back in the 90s and early 00s, I complained Hasbro didn't do enough repaints - for when they made sense. This Elite Squad Trooper does a great job proving that times have changed. In the 1990s, Hasbro never repainted its earliest R2-D2 or C-3PO molds to give us other robots, and many of their Stormtrooper variants used a lot of new parts - heck, it took a while for them to really get the swing of Clone Trooper repaints too! Of course, now they have no such hang-ups. The Bad Batch Trooper is a "kitbash" of the Clone Trooper (Kamino) [FOTD #2,749] - so it's a bit more than a repaint. The torso and arms were used for numerous Clones from 2020 to today, but the legs are the ones from the earlier releases - you'll notice the older copyright markings on the feet and the double-jointed knees, plus a lack of the floating patella-covering armor piece that was on some of the other releases. I think the build is sturdier as a result.

In some respects the figure is perfect, in others it's a letdown. It costs more than the original release of the molds. It has less paint. It has one of the two blasters. You don't feel like you're getting a good deal here, but you are getting a good representation of one of the Empire's first expendable troopers - in the show, they're brought on to prove (for some reason) made-to-order clones are no longer necessary. Of course, they're very necessary for budgeting reasons - these things aren't cheap to make, so being able to sell fans the same molds a dozen or more times really helps finance other projects and keep these things coming when there are no movies. And they sell! This guy came out in February and I haven't seen a single one in a store. The dark grey, shiny armor looks great and the green visor is excellent. 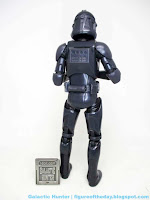 Hasbro found a great way to cut corners and provide fans an authentic experience - I'm impressed! The leg swap choice is a surprise, but it also looks good and I assume freed up the leg tools for some other figure(s.) I don't need to go into the details of this mold too much, but I will say it's largely free of paint and has no visible battle damage I can see. If you're collecting The Bad Batch 6-inch figures, you should get it - but like so many of you I'd rather have these as 3 3/4-inch figures. I am not going to build any 6-inch armies. But I totally like the generic trooper, and I assume some day they may decide to make them with the alternate, unmasked heads we briefly saw in the show. Or not. Hasbro has been kind of erratic on "completing" any sets anymore, with increasingly haphazard character selections making it difficult for fans to get an entire shelf of similar toys without having to call in favors or pay eBay prices for at least a few figures. So if you can get it for a fair price, you totally should - heck, buy a few, if you can luck into that Imperial deco of Crosshair. (And if you do, call me, I got cartjacked out of quite a few pre-orders this year.)