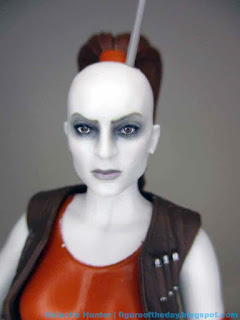 Bio: A feared bounty hunter known for her chalk-white skin and built-in comlink antenna, Aurra Sing was an expert sniper and trained assassin who would work for anyone who paid her. (Taken from the packaging.) 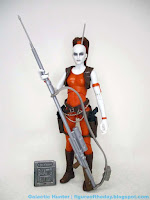 Commentary: This is a good one also. Aurra Sing is a figure that seems to span multiple eras, in several ways. Her double-jointed knees with visible pins make me assume this design may have been started a few years ago and shelved until recently - most newer-sculpted figures have a bend-and-swivel knee design. (I could be wrong.) This one is loaded with articulation, 27 points in all, plus a pair of holsters 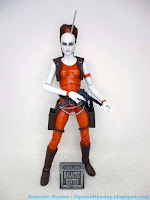 Labeled "Babe Fett" on some early concept art, this cameo from The Phantom Menace became a much bigger deal in The Clone Wars and in the various Dark Horse Comics publications in the early 2000s. She wore pretty much the same exact outfit in most of her appearances (although there is a black outfit that got to be a Walmart exclusive once), so if you want to see this as a cartoon version or the movie version, one thing is certain: they're pretty much the same.

The sculpting of the su per-tight orange onesie is good, the various belts and vest hang over it nicely, and all the joints work pretty well. She can stand holding the rifle, she can hold the pistols, and the holsters work well too - this is a well-engineered figure with paint that's about as good as I assume we'll ever get on a Hasbro consumer-level Aurra Sing figure. My only gripe is that the antenna - a separately molded piece - is a teensy bit translucent, so in bright light it looks a lot less like metal. The same is true of the thinner parts of her rifle. It's by no means bad, but you can make an argument for some silver paint if you're a customizer. 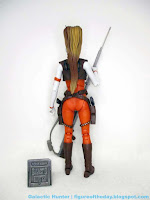 There are some figures where you can nitpick details to highlight, but this one pretty much does everything you want... and does it efficiently. Separately molded hair, great eye make-up paint, a few silver painted elements on the vest, she's good. You feel like you basically get your price increased $23 worth here - and I don't doubt we may see revisions in a repaint down the road. I wouldn't wait if you see this one, just go ahead and get her. She's neat. Having said that, I look forward to excuses for figures that are not bounty hunters nor freedom fighters nor government thugs. Alien Space Trucker is also a fine profession.