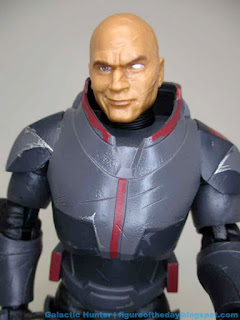 Bio: The boisterous bruiser of the Bad Batch, Wrecker has brute strength that makes him capable of lifting a clone gunship without any help . His muscle and size are matched only by his temper... and an equally pronounced sense of humor. (Taken from the packaging.) 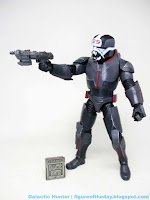 Commentary: Rounding out the original Bad Batch, Wrecker joins Crosshair, Hunter, and Tech - and later, we'll get Omega and Echo - meeting our basic standard of collecting with the main characters seeing plastic. That's really the one thing you have to do when doing action figures for fans of any age - if you don't make all the regulars, it's not even worth kicking off a collection. (Hence, the disappointment on so many levels that is Star Wars Resistance.)

Given the much higher price point, Wrecker's a figure that has to show something to indicate it's better. After all, Chewbacca was huge, and cost the same as a basic figure. I'm glad to see that Wrecker does do some things that warrant the deluxe price point, but it doesn't seem 50% fancier than Hunter - but it's definitely unquestionably superior in production quality. Articulation is on par with the best of basic new figures, including the now-expected swing-forward shoulders and the armor that rotates with the shoulder. You get rocker ankles, elbows with good cuts and decent legs. Every joint moves surprisingly well for a bulky, armored figure with a rubbery armor vest hiding some of the torso joints. In terms of engineering, Hasbro did an A+ job - just like they did with the other Bad Batch-ers. You'll love how he can stand, you'll be impressed by the sculpted armor scrapes, and you're going to love the helmet too. 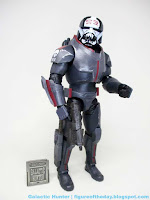 Also awesome, a realistic take on the distorted, goofy Temeura Morrison portrait used on the cartoon. Wrecker's wacky almost-a-sneer is unlike anything else I've seen in Hasbro Star Wars figures, and is probably one of the singular most expressive good faces we've ever received. Again, they deserve an award for this - it's quite possibly the very best human head they've ever done. Generally we just get good, neutral expressions - seeing what they did here with Wrecker makes me think there's still hope for a really, really, really good Han Solo some day. (Or, if they go that route, Indiana Jones.) With the sculpted scars and injured eye, everything about this figure looks like so much care and work went into getting it right. While that's not necessarily required for a deluxe figure, the extra effort is the kind of thing that makes me feel a little bit better about paying a premium for a figure like this.

Deco is also excellent - the head has an awesome paint job on the face which only highlights the spectacular portrait, but it's worth noting the scars and sides of the head are more or less left bare. I know you have to cut the budget somewhere, but I would've loved paint on the scars. The armor's paint is also excellent, but sadly they left off some stuff. We did get some painted battle damage - which we didn't on the others - but Hasbro left off the red highlights on the elbow and knuckle armor panels. At $32 we really should have those paint applications on a figure that's no more complex than a $23 figure. It's not nearly as ornate as the show - nor should it be, that paint job is complicated beyond a reasonable capacity for mass-production - but the big chest scar would be nice to have some silver there, and the red stripes would've been a plus. As it is, it's not amazing for the price, but OK. 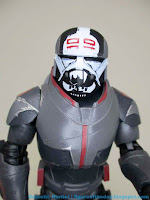 You also get a removable helmet (good paint), a blaster (no paint), and a giant knife (perfectly painted silver blade.) Each element looks like it was handled correctly here, or is at least good enough that I can't complaint about it at the price.

While this figure absolutely has more going for it than some of the other deluxe figures, there's not a lot more here other than size to warrant a higher price point - and as we've seen with Chewbacca, size doesn't mean it has to cost more. But is it good? Yes. Did they do some amazing things with it? Absolutely. Is that human face worth the price of admission? Without a doubt - no other figure looks this interesting, and for that reason alone I'm going to go ahead and say hold your nose and spend the $32. The silver highlights on the sculpted damage were what I looked for when I first opened it, and I was not disappointed.

AWESOME reveiw man! Mine comes today!(literally..when I went to buy it off Hasbro pulse? it said."last one" once I was done ordering.. scrolled back later..and..to my sh'GRIN? -'sold out'! I literally got that last one that day. lol. kind of a neat story. Happy Holidays ❤