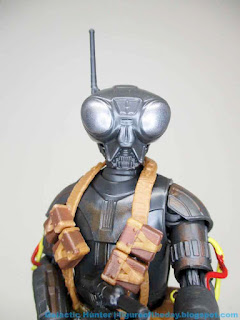 Bio: A bug-eyed protocol droid with modified programming, Q9-0 - or "Zero" to his colleagues - operates with precision timing. (Taken from the packaging.) 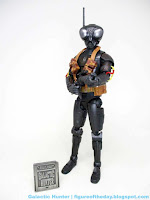 Commentary: Hey kids, it's Moss! (Also a prolific director of television.) Q9-0 is a character that I was really looking forward to, and a figure that turned out, well, acceptably. It's a good figure. I don't love it, but I like it a lot - and I'm crossing my fingers Hasbro does a Kenner-style one some day. (This is very retro!) The bounty hunter-adjacent droid of action is a new sculpt with a blaster clearly inspired by the old Boba Fett EE-3 carbine rifle, just shorter. Or perhaps sawed off. Who can say?

The figure has a harness with pouches (just like on the show!) and lots of articulation (just like on the show!) The head strikes me as softer in detail than some other figures, but it looks like they got the proportions correct. The unique mouth is there, the big silver eyes are there, and the antenna is there too. The cables on the elbows are clearly visible, as are clear pins in the knees for added stability and authenticity to what we see on the screen. He has just shy of 30 points of articulation, and is a marvel of articulation sculpting. All the joints move nicely and are integrated in his body almost perfectly, with a tiny bit of obstruction in the shoulders and the hips - but the latter can be worked around by rotating the thighs. That's great! He stands, he can hold his gun, he even has the fancy tilt-forward shoulders that they forgot to give Lando. 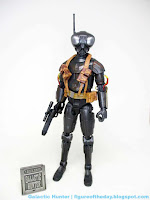 As much as I love the sculpt, the deco comes up short. Why? Materials. The grey seems to be a bit light - and isn't quite as opaque as I would prefer. A darker color would have been good, just to give the illusion that it's metal. As it is, it's plastic, and it looks plastic. I rarely would be inclined to say if Disney did a new 6-inch die-cast metal one I'd be interested, but in this case I would. The vest is fine, the paint is perfectly nice, it's just that his plating should be a slightly darker color. I like the chest's scratches and dirt, even though they are a bit overshadowed by his vest. Nobody took any shortcuts on this one.

If you've been collecting figures from this series, and you love droids, this is a can't-miss figure. Until version 2.0 comes along, that is. It's good enough for now, and with no other options, this is the Zero for you. I'm glad they made it, the sculptors did their work just fine, and hopefully more of the crew will make an appearance as action figures some day. (I still genuinely don't understand why they're not doing Mando theme waves once or twice a year.) Oh, and Happy Thanksgiving, I assume nobody is reading today.