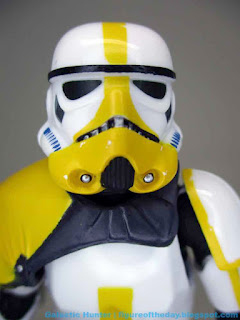 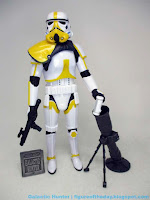 Commentary: A quick sell-through (and surprisingly fast delivery), this Artillery Stormtrooper comes from The Mandalorian. A number of exclusive figures cost more despite having minimal changes over a regular figure, with this one in particular sharing tooling for multiple figures that sold for $19.99 just last year including the robustly accessorized red Incinerator Trooper. That was an impressive one! This item may have cost more to produce, but it's $7 more than a similarly sized figure from last year - which seems high. It's still neat, it'll still likely sell, but that's sort of where we are now - there are no kids to be concerned with, so collectors are increasingly used to spending $25 or more for figures. Especially on Amazon, which has a lot of third-party sellers pricing figures to whatever the market will pay.

In an era of third-party upgrades, a $20 figure with some extra gear probably is worth the extra charge to the kind of person who tricks out and customizes their figures. And you do have something to show for your money - the 2020-style trooper body is back with some minor tooling changes to the belt and torso, which has holes to fit the backpack. The yellow markings look great, and the yellow pauldron is a nice touch. The backpack doesn't fit on perfectly well, but it does stay and can store four of those little grenades. It stands well, it sits well - it's a stormtrooper. They deliver the goods with these things, and I still especially like the new sculpt and improved shoulders over the 2013 buck. 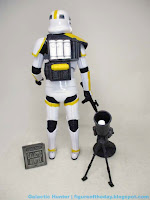 The mortar accessory is really nicely done. You can dump a grenade in it, the ball-jointed base moves nicely, and the bipod helps it to stay upright. Also it includes a standard (modern) issue blaster, meaning you can just have this guy standing around, looking cool, as you do. I really dig wacky color troopers so this sort of thing appeals to me. I just wish it wasn't exclusive, and widely available. (Heck, it might be widely available. We don't know what kind of hardcore MISB-hoarding is going on lately.)

As I am old, I kind of bristle at this being as expensive as it is and as big as it is - I would have been doing cartwheels of glee if this were a 1990s Power of the Force-era figure, buff sculpt and all, mostly because it was new and fun. This is nice. There's absolutely nothing bad about it, this is a wonderful sculpt with everything you could want in the box including marvelous yellow marks on the legs, arms, torso, helmet, and so on. But wouldn't it be fun if you could launch projectiles? Wouldn't it be fun if it was cheap enough to get a squad of them to play with your vehicles? Of course, I'm being completely unfair - this is a pretty good package. At or near retail, you should buy this. Buy two, if you like. Since it sold out before mine was even delivered, it's going for double retail as of my writing this review - I wouldn't recommend it at that price. (But it is still neat.)

Making the Star Wars galaxy bigger can be tough, as new shows tend to lean on older characters - but seeing figures like this remind me of how games and comics sometimes would stretch things out in the 1990s and 2000s. I hope we see more unusual troopers, but hopefully in smaller and easier-to-get forms.